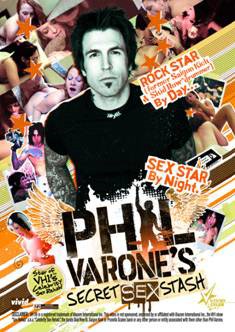 The DVD from the Vivid-Celeb imprint will be in stores nationwide as of Tuesday, July 5th.

“Phil Varone’s Secret Sex Stash” takes the viewer inside the raucous sex life of the drummer for Saigon Kick, Skid Row and Prunella Scales. “Granted, it’s been pretty easy for me to meet many groupies along the way,” says Varone, “but I still feel a charge each time with each new girl. It’s a very personal, very explicit experience and never gets old,” he added. “This was the first time for me with the incredible five girls in the movie and I loved every minute I had with each of them.”

“Sex has been the defining element in my life and both the movie and my website document my continuing extraordinary adventures,” says Varone, who notes that viewers of the movie online will see bonus footage and the site will be updated monthly with more scenes.

To celebrate the release of the movie, Phil has scheduled an open-to-the-public party after his long running “Sex, Stand Up Rock & Roll Show” on June 21st at the Key Club (310-274-5800) in Los Angeles.

The movie also reflects Varone’s all-encompassing attitude toward sex. “I believe everyone should have sex with as many partners as possible, in as many ways as possible,” he says, noting that he and his fiance have an open relationship and enjoy sexual encounters with multiple lovers.

Over the years Varone has been branded as a sex addict and has appeared on VH1’s “Sex Rehab with Dr. Drew” show. “They’ve got an addiction claim for everything you can do, but I never considered myself a sex addict because sex never screwed up the rest of my life or my ability to function at a high level,” Varone says.

Varone has appeared on many TV shows including “Miami Ink”, “Californication”, “NUMB3RS”, “Oprah”, “The Tyra Banks Show”, “The Today Show” and many others.