The inaugural Slam Fest presented by Beyond Oz and featuring Queensrÿche, Skid Row, Great White and Lies, Deceit & Treachery will be taking place at the On The Grand Event Centre in Kitchener, Ontario, Canada on Saturday, July 6, 2019. 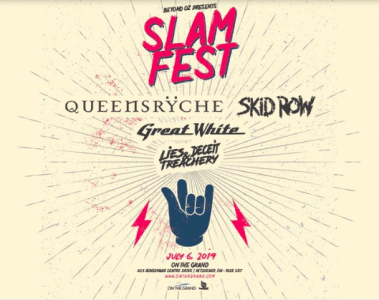 The Roxodus Music Fest has some heavy hitters and some Sleaze Roxx favorites such as Aerosmith, Alice Cooper, Cheap Trick, SteelHeart and Lee Aaron.

Tickets for Slam Fest can be obtained via the Show Pass website, which states: