Slash featuring Myles Kennedy & The Conspirators have released a new single titled “The River Is Rising” which is the lead track from their upcoming album, 4. The hard driving song can be heard below: 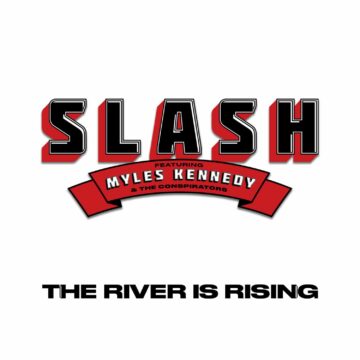 Slash spoke with BOBs Rockcall on October 21, 2021 about the new album. Excerpts from the interview are below (as transcribed by Sleaze Roxx with slight edits):

“It’s a really good record. Obviously, it’s a real hard rock record, but it’s very diverse. One of the primary things about the way it sounds is that we recorded it completely live. Bass, drums, guitars, guitar solos, vocals — all that stuff we did live. The only real overdubs we did were some background vocals, [some] percussion and a couple harmonies. That’s the first time I’ve really had that opportunity to record everything live at the same time in the moment, so it’s got a certain energy to it and a certain kind of urgency that makes it different from the other records that we’ve done.”

Slash also talked about working with Myles Kennedy again: “He’s got an amazing voice, he’s got an amazing range and he’s very musical. On top of that, his personality is very sort-of laid back and easy-going. We just get along really well and work really easily together.”

The album 4 is set to be released through Gibson Records on February 11, 2022.