Good news for Slash fans as following almost two years of touring for Guns N’ Roses‘ very lucrative Not In This Lifetime tour, the guitarist will be releasing a third studio album with his band Slash featuring Myles Kennedy & The Conspirators. 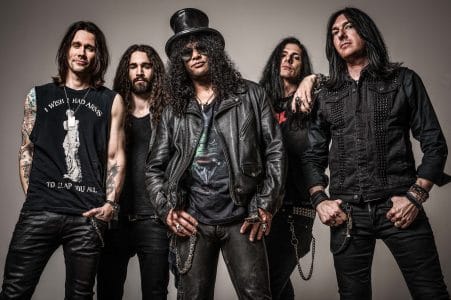 The following is an excerpt from an article from Blabbermouth in that regard (with slight edits):

“I’m excited about the new stuff we put together for this next record; it’s got some cool songs and it’s got a great live feel,” explains Slash. “I’ve been working with Myles, Brent and Todd for about eight years now. It’s been an amazing ride so far; as a band we continue to get better which is great. With the addition of Frank since the ‘World On Fire’ tour, I feel we have hit a great, creative stride which I definitely think shows on this next record.”

Slash adds: “Guns N’ Roses will be headlining European festivals this summer, it’s going to be a 110 percent performance and a huge blast. I love doing European fests and this is the first time we’ve done any proper festivals over there on the ‘Not In This Lifetime’ tour. It’s indescribable to explain these shows. I’m looking over and seeing Axl, Duff and Dizzy whom I’ve known forever, but it also feels like an entirely new experience with Richard, Frank and Melissa. It’s like being in a new band, except there’s a chemistry that is established from days of old, so it’s a natural thing that’s always been there.””

Sleaze Roxx stated the following in its review of Slash featuring Myles Kennedy & The Conspirators‘ last studio album World On Fire (which landed the #6 spot on the Sleaze Roxx Readers’ Top 20 Albums of 2014): “Unfortunately, the lessons about limiting a record to only the great stuff fell on deaf ears. Slash is at it again with World On Fire, this time offering seventeen songs. Not surprisingly, there are a few duds that could have easily been omitted, the biggest offender being the closing “The Unholy” — which is a dull, moody and slow plodder that should never have made the cut. The song does pick up during certain instances, but overall it is a sad way to end a rocking CD. Although World On Fire has too many similar sounding songs, there are enough good and even great tracks included to appeal to any hard rock lover — and at the same time will likely garner some major radio airplay.”