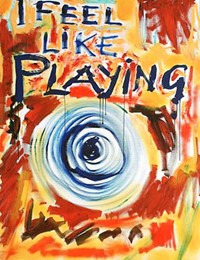 Eagle Records are delighted to announce the release of Ronnie Wood’s brand new studio album “I Feel Like Playing”. The album is being released on 27 September 2010. Featuring twelve brand new cuts, written specially for this release, “I Feel Like Playing” takes its name (and cover) from one of Ronnie’s most vibrant recent artworks. The colour and verve of the artwork is equally reflected in the swagger and roll of the music on the album. The album boasts an amazing set of guest artists who have colluded with Ronnie to create something truly special.

Ronnie Wood needs no introduction to any fan of British rock music. Starting his career with The Birds and then Creation, it was when Ronnie joined the Jeff Beck Group that he truly started to stamp his identity on the music world. After that group split, Ronnie — along with Rod Stewart — joined up with ex-Small Faces Ronnie Lane, Ian McLagan and Kenney Jones in The Faces. Whilst Ronnie (and Rod) moved on after a couple of years, The Faces are viewed by all rock fans as a truly classic band; and in fact they perform a handful of dates in 2010 with Mick Hucknall on vocals. After the release of his first solo album, Ronnie was invited to join the Rolling Stones in 1975 — and remains with them to this day.

Solo work has always co-existed alongside Ronnie’s band commitments and “I Feel Like Playing” is, he feels, his best album yet. Many of the friends made along the course of an incredible career appear on the album; guests include luminaries such as Slash, Flea, Billy Gibbons, Kris Kristofferson, Bobby Womack, Ian McLagan and more.

Rightly revered for his time with The Faces, Jeff Beck Group and of course The Stones, Ronnie Wood has continued to chart his own course and his output of both high quality music and art has been a constant. “I Feel Like Playing” is a great addition to his catalogue and all lovers of true British creative mavericks will find much to admire.”

Whilst you wait for the album listen to a preview of “Thing About You” at www.ronniewood.com/album_promo.aspx.

I Feel Like Playing track listing:
Why’d You Wanna Do A Thing
Sweetness
Lucky Man
I Gotta Go
Thing About You
How Am I Gonna Catch You
Spoonful
I Don’t Think So
100%
Fancy Pants
Tell Me Something
Forever