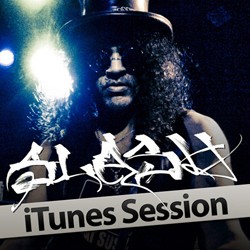 The new digital release is available exclusively at iTunes.com and contains the songs “Back To Cali”, Led Zeppelin’s “Communication Breakdown”, “Fall To Pieces”, “Rocket Queen”, “Starlight” and “Sucker Train Blues”.

Slash and his band Velvet Revolver are getting close to announcing their new vocalist. In a recent interview with Gibson.com Slash stated, “Well, the main thing is looking for a singer. And everybody has been quietly listening to demos and stuff from singers this whole time. They’re just really, really few and far between. There are a lot of good singers, but the right kind of rock and roll singer for a band like Velvet Revolver is very few and far between. So everybody has been doing their own thing in the meantime. We will reconvene sometime next year and sit down and listen to all of the demos that we have and see if we have anything. As soon as we do find the right guy, then we’ll focus on making another record.”

When asked if Myles Kennedy was a condidate for the Velvet Revolver gig Slash replied, “Well, the reason I know Myles in the first place was, Matt Sorum had mentioned his name as being a possible candidate for Velvet Revolver and (he) called Myles and asked him to come down. And Myles declined because he was in Alter Bridge, which he still is. So that was how that went. So I don’t expect him to leave Alter Bridge in the future to join Velvet Revolver. He’s working with me, but it’s during breaks and stuff from Alter Bridge.”