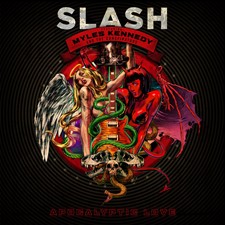 The new album from Slash, ‘Apocalyptic Love’, will drop on May 22, and the guitarist has now posted the full tracklist on www.slashonline.com. Many fans have already heard the first single, “You’re A Lie,” spinning on Rock radio, and the song features the vocal stylings of frontman Myles Kennedy, who wrote all the lyrics. “You’re A Lie” is the #1 most-added track at Active Rock radio is available today on iTunes.

“I completely left the lyrics to Myles. As far away from lyric writing as I can get, the better,” Slash told Rolling Stone. “He’s a good lyricist, so it’s not an issue.” The guitarist added that the song was actually the second track he brought to Kennedy, but it wasn’t finished until the very end of the recording sessions. “We changed the arrangement twice, and it was the last thing we worked on in the studio when we were doing the album,” Slash said. “It was the last one we did and, funnily enough, the first one we released.”

With the album coming in May, Slash and his band are getting ready to hit the road. A full tour kicks off on May 3 in Baltimore, and the band will play a number of big Rock festivals including Carolina Rebellion on May 5, Rock On The Range on May 19 and Rocklahoma on May 25, not to mention a number of radio festivals.

“I’m looking forward to going out and jamming the stuff live and doing what it is that I do best,” Slash told Rolling Stone. As for which new songs he might play live, Slash said that, “There’s a song called ‘Anastasia,’ which would be killer for us to play live because it’s probably the longest, most instrumentally adventurous song on the record. There’s a lot of guitar in it. There’s the song called ‘Apocalyptic Love,’ which is the title track of the record and the first song we ever did together.”

And of course, fans are wondering what will happen when Guns N’ Roses is inducted into the Rock & Roll Hall Of Fame on April 14. According to Slash, it’s anyone’s guess. He said simply: “It’s just far enough away at this point where I’m not focusing on it at all and there’s been no new news about what’s gonna happen there.”