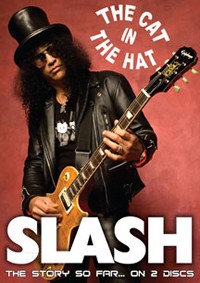 Slash ‘The Cat In The Hat’ DVD Documentary Due In August

A revealing two disc DVD documentary about former Guns N’ Roses guitarist Slash, called ‘The Cat In The Hat: The Story So Far’, will be released on August 21st.

The most iconic rock guitarist since Keith Richards, Slash has achieved the status of ‘most interesting hard rock act in the world today’. And 20 years after the demise proper of the group with whom he made his name, he continues to build on an already remarkable career trajectory, while his old sparring partner in Guns N’ Roses produces pale imitations of past glories.

This two disc, 131 mintute set includes a DVD documentary tracing the life and times of Slash, and a disc of audio interviews with the Cat himself during which he speaks candidly and honestly on almost everything he feels strongly about.

Slash recently released his new album ‘Apocalyptic Love’, featuring Myles Kennedy and The Conspirators, through his own label Dik Hayd International. ‘Apocalyptic Love’ follows his 2010 debut album ‘Slash’ and his first ever live solo album, the two CD/DVD set ‘Made In Stoke 24/7/11’. For the new album, Slash — along with and his bandmates Myles Kennedy (vocals), Brent Fitz (drums) and Todd Kerns (bass) — teamed with producer Eric Valentine, who also produced the ‘Slash’ disc.