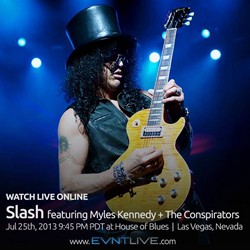 Slash Featuring Myles Kennedy and The Conspirators will broadcast their last summer concert live from the House Of Blues in Las Vegas on Thursday, July 25th at 9:00p PT/Midnight ET via EVNTLIVE.

EVNTLIVE is the online concert venue that captures the excitement and shared experiences of live concert viewing with a global audience. Fans who can’t make it to Las Vegas and want to experience the evolution of live, online concerts can log on directly to www.evntlive.com/#/event/1000476/ on Thursday, July 25 to take part in this extraordinary social viewing event.

“As a co-producer of both the motion picture ‘Nothing Left To Fear’ and the soundtrack to the film, I’ve been heavily involved in every step of the creation of both the film and the score,” says Slash. “I’ve decided to make this soundtrack exclusively available on PledgeMusic as a way to gain a more personal interaction with you guys, the fans. I am a huge fan of horror films ever since I was a little kid in England, and now I’m excited to share the process of what goes into creating projects like this.

“Anyone who pledges will not only have access to behind the scenes interviews, early looks at soundtrack art, and exclusive signed items, but you will also have access to a live chat where I’ll answer some of your questions about the film, the score, and everything that’s been happening along the way,” continues the former Guns N’ Roses guitarist. “As a bonus, we’re going to give you one song from the soundtrack as soon as you pledge.”

The album will be available for pre-order exclusively at www.pledgemusic.com/slash. When fans pledge and pre-order the album, they will gain access to one-of-a-kind experiences with Slash, as well as merchandise for the film.