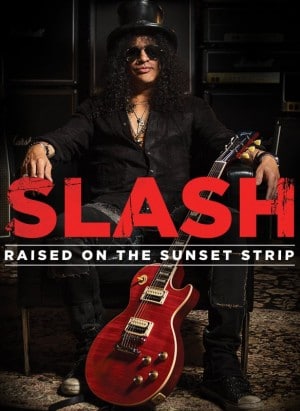 Universal Music Group has just released a documentary on Blu-Ray and DVD about iconic Guns N’ Roses guitarist Slash entitled Raised On The Sunset Strip which follows the axeman’s start on the Sunset Strip all the way to his last album World On Fire.

Slash‘s World On Fire attained the number six spot on the Sleaze Roxx Readers’ Top 20 Albums of 2014 at which time Sleaze Roxx stated: “You know Axl Rose is secretly kicking himself after witnessing the success of Slash‘s band and the numbers he brings on tour is starting to come close and maybe even surpass Rose‘s Guns N’ Rose (yes that was a deliberate typo). With World On Fire, Slash brings a maturity to his songwriting that surpasses his old Snakepit compositions while maintaining shades of Guns N’ Roses‘ ferocity and sleaze. If you doubt that just give “Dirty Girl” a listen… Big kudos to the squeaky clean pipes of Myles Kennedy who makes singing hard rock and hitting those high notes just seem so effortless. Slash has proven that he does not need Rose to experience mainstream success and with Kennedy handling lead vocal duties, the sky is the limit for Slash featuring Myles Kennedy & The Conspirators!”

Slash dropped by the Guitar Center Hollywood Vintage Room and talked about his musical beginnings, inspirations, and recording process on his last albums. Be…