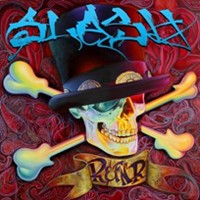 Slash’s first true solo album is now streaming in it’s entirety at http://music.aol.com/new-releases-full-cds/#/15. The self-titled CD features an all-star cast of musicians and singers, including Dave Grohl, Iggy Pop and Ozzy Osbourne. ‘Slash’ is slated for an April 6th release and can be pre-ordered at Amazon.com, iTunes.com and most other music outlets.

In related news, Slash is celebrating the release of his first true solo album, Slash, with an in-store signing.Starting on April 6th (release day) at Amoeba Hollywood, the first 300 people to purchase Slash’s new self-titled album will get to come back for a special Record Store Day Signing. Fans will get a laminate/pass to bring back on April 17th for admission to the signing. Signing is limited to ONE item per person. See below for full details.