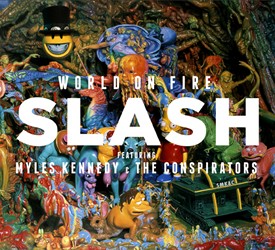 Slash and his bandmates Myles Kennedy and The Conspirators will release their new album ‘World On Fire’ on September 15 via the guitarist’s own label Dik Hayd International.

For ‘World On Fire’, Slash and his band tapped Michael “Elvis” Baskette (Alter Bridge, Falling In Reverse, Incubus) to produce. Among the 17 songs is an instrumental — a powerful new turn for the band.

‘World On Fire’ is the follow-up to 2012’s critically acclaimed ‘Apocalyptic Love’, which debuted at #4 on the Billboard Top 200 chart, earned Slash two #1 U.S. rock radio hits (his first ever solo) with “You’re A Lie” and “Standing In The Sun”, and was voted the third best album of the year by Sleaze Roxx readers.

Slash officially began recording as a solo artist with his self-titled 2010 debut album which employed a different vocalist on each track including Ozzy Osbourne, Fergie and Myles Kennedy among others.

Slash featuring Myles Kennedy and The Conspirators will be touring Europe and the United Kingdom in 2014. Tickets go on sale on Friday May 30th, visit slashonline.com for a complete list of dates.