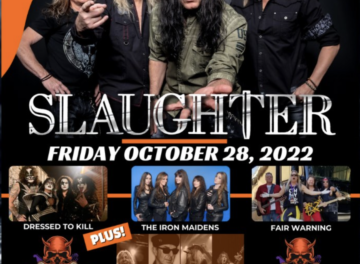 Kruise Fest, which is the annual fan festival that takes place just before the KISS Kruise, will be returning again this year with headliners Slaughter and a partially reunited Frehley’s Comet on October 27 and 28, 2022. 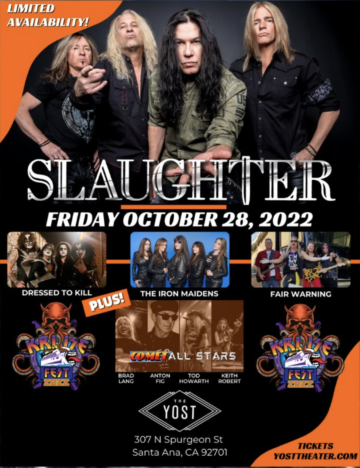 “This October, sailing out of Los Angeles, California, the 11th KISS Kruise will take to the high seas with over 3,000 KISS fans aboard and ready to rock! Each year, in true KISS Army style, various fan-organized pre-kruise parties and reunions are held in the city of departure. This year, kruisers Joe and Patrice D’Angelo, with a team of fellow KISS Navy members will present “Kruise Fest” a two-day bon voyage party and concert at the Hilton Downtown San Pedro and the Yost Theater.

This year’s Kruise Fest is sponsored by Drink It Up by KISS (KISS Rums and KISS Cold Gin), Gene Simmons Moneybag Sodas, Photographer Bobby Dreher, Rockefellas, and Yamaha. Fans will be able to pre-order their bottles of KISS Rum and KISS Cold Gin – including a BRAND NEW EXCLUSIVE “KISS NAVY Strength” bottle only available at Kruise Fest – and pick them up from the Drink It Up table at the event. There will be drink specials available from the Drink it Up brands as well!

The event takes place on Thursday, October 27 and Friday, October 28 with a line-up of national rock and roll acts and comedians, and Los Angeles-area talent. Kruise Fest begins with a Bon Voyage Party on October 27 at the host hotel, the Hilton Downtown San Pedro, hosted by Miami DJ and KISS Kruise veteran, Andrew “DJ Noiz” Rodriguez. Headlining the evening will be the “Punchlines and Backlines: Music and Comedy Unite” Kruise Fest Komedy show, hosted by Creator and Producer (and KISS Kruise alum) Courtney Cronin Dold and featuring headliners Hal Sparks (E!’s Talk Soup and Queer as Folk) and Craig Gass (King of Queens, Family Guy, American Dad, Sex and The City). A surprise rock star guest will be joining for their very first comedy set! Legendary drummer Vinny Appice will also be on hand to autograph purchased merchandise. 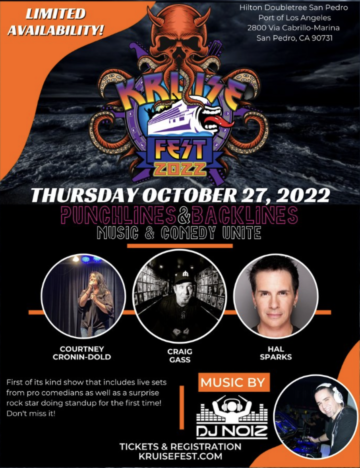 Friday’s events will be held at the Yost Theater, one of Orange County’s oldest and largest venues for live entertainment, and an iconic landmark of Santa Ana’s vibrant downtown since 1912. The show kicks off with sets by local favorites Fair Warning: the Van Halen Experience, and LOVEDRIVE, the Leading Tribute to the Scorpions, followed by Dressed to Kill, a popular L.A. KISS tribute band featuring all the make-up, costumes and stage show you’d expect of a KISS tribute! Next on stage are the wildly popular Iron Maidens, the world’s only female tribute to Iron Maiden, followed by a reunion of members of Frehley’s Comet, Ace Frehley’s successful solo project: Tod Howarth and Anton Fig, joined by Brad Lang (Y&T, The BulletBoys) and Las Vegas-based guitarist, Keith Robert for a set of Comet and KISS classics. The night’s headliner is the multiplatinum-selling, American Music Award-winning band, Slaughter. The entire night’s festivities will be emceed by Craig Gass, and between-set tunes will be spun by DJ Noiz.

Several benefit raffles will be held, with profits donated to the National Down Syndrome Society. The first announced raffle is for a cabin on the upcoming Beach Boys Cruise to Belize and Mexico, generously contributed by Sixthman, the company that brings fans The KISS Kruise. Gene Simmons Moneybag Sodas has also contributed a Moneybag guitar, signed by Gene Simmons himself. Former KISS guitarist Bruce Kulick will also contribute a signed guitar. Tickets for these raffles and more, along with limited edition Kruise Fest merchandise, can be found at www.kruisefest.com.

General Admission packages admit guests to the entire two-day event; single day passes are also available for either the comedy show or the concert. A limited amount of VIP tickets are available, which include preferred placement in the front rows of the concert and a VIP-only cash bar, a meet and greet and photo with original members of Frehley’s Comet, and autographed items. A round-trip party bus shuttle is available from the two hotels offering room blocks for the event: The Hilton DoubleTree San Pedro and the Holiday Inn Gateway Torrance. For tickets and event details go to www.kruisefest.com. For the October 28 concert, local residents can purchase tickets directly from The Yost Theater.”