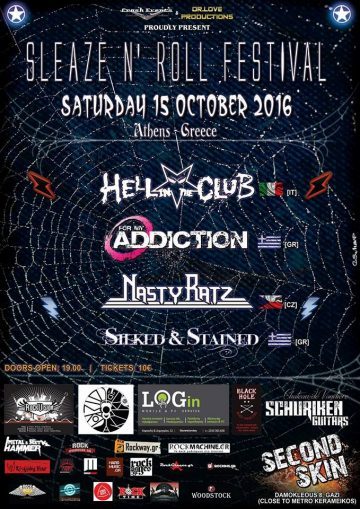 The Sleaze N’ Roll Festival, which is to take place at The Second Skin Club in Athens, Greece on October 15, 2016, has been hit with some bad news as its headlining band (BlackRain) has pulled out of the festival.

The festival’s original line-up consisted of BlackRain, Hell In The Club, For My Addiction, Nasty Ratz and Silked & Stained. The four remaining bands will still be appearing at the festival on October 5, 2016.

It appears that BlackRain opted to instead play a show at the Élysée Montmartre in Paris, France on October 15, 2016.

Sleaze Roxx stated the following in its review of Hell In The Club‘s latest album Shadow Of The Monster, which was released back in February 2016: “Shadow Of The Monster is something a little different from Hell In The Club‘s first two records. It is more mature, and generally less aggressive lyrically than previous albums. The group’s debut album Let The Games Begin featured the song “Raise Your Drinking Glass” which is still one of my favourite party songs. 2014’s Devil On My Shoulder had “Pole Dancer” and “Save Me” as great rock tunes. I’m not hearing anything quite so bold and blustery as that on Shadow Of The Monster, and that’s alright too. Shadow still has its rock going for it… This record will cast a long and dark “shadow” over the Sleaze Roxx’s Top Albums of 2016 lists. Shadow Of The Monster is a great cross section of Italian hard rock and worth every second of listening pleasure.”