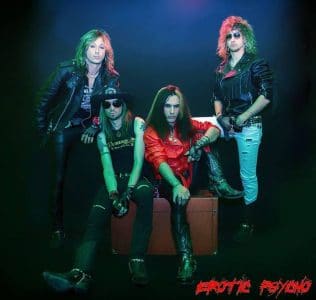 Soon after, and quite by chance, they met Frost Moore (drums), who was playing in the Celtic Rock band Leukoners and, from the very first moment, they realized that Frost‘s way of playing drums, his looks, his attitude and his heart were pure heard rock dynamite, so they joined forces.

At that point only one element was missing in order to close the circle: a bass player with attitude. Jay remembered a guy he knew who fitted completely. Lokki (bass), a sleazy motherfucker from the Alicante scene. The only problem was that he was already playing in the hard rock band Gang Bang 66. However, when Lokki got the phone call from Jay, the former, coincidentally again, had just considered that band finished and accepted the invitation…

In late 2015 Jay Martino has to leave the band due to his personal situation and is replaced by Yamil Zaidan, a young and talented guitar played from Madrid, who brings a breath of fresh air and means a new energy injection to the band.”