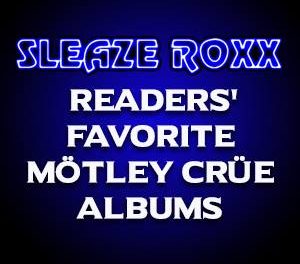 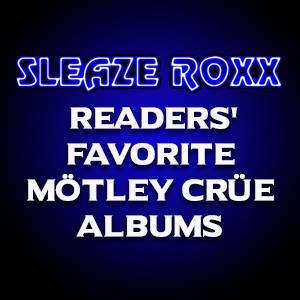 If you had to name the forefathers of sleaze type rock, you would be hard pressed to come up with another band than the once bad boys of rock n’ roll — Mötley Crüe. There is no doubt that Mötley Crüe have had a huge impact on the genre as evidenced by Sleaze Roxx’s recent survey of the Top 12 Albums that have stayed with Sleaze Roxx readers. Mötley Crüe simply dominated the survey with their breakthrough album Shout At The Devil landing the #1 slot while their highest selling album Dr. Feelgood reached the #4 spot. To put things into perspective, Sleaze Roxx readers could only vote for one album per band yet Mötley Crüe were the only band along with Def Leppard to place two albums in the top 12 albums survey. Perhaps the most telling statistic was that a whopping 63% of the people that responded in that survey chose a Mötley Crüe album as one of the Top 12 albums that have stayed with them over the years.

This time around, Sleaze Roxx readers were asked to name their top five Mötley Crüe albums. I was pretty sure that Shout At The Devil would take the top honours but the rest of the album rankings would certainly be interesting and there were indeed a few surprises. As a testament to the quality of Mötley Crüe‘s studio albums, all of their studio records received multiple votes and all figure in this survey. That being said, Mötley Crüe only released nine studio albums in their 34 year history so there are not that many albums to choose from when picking your top five Mötley Crüe albums. Without further ado, here is the Sleaze Roxx Readers’ Favorite Mötley Crüe Albums!

p.s.: In terms of how the scoring was tabulated, it was very simple with a number one album receiving five votes, a number two album receiving four votes, etc. until you reach the number five album receiving one vote. When a reader attributed no ranking towards his/her top five Mötley Crüe albums, the number one album was identified as the first one listed, etc. The percentage that you see beside each album title heading is the percentage of total votes that the album achieved in this survey. As an example, if every Sleaze Roxx reader voted the same Mötley Crüe album as its #5 album, that album would finish with a percentage of 20% meaning 20% of the possible votes. 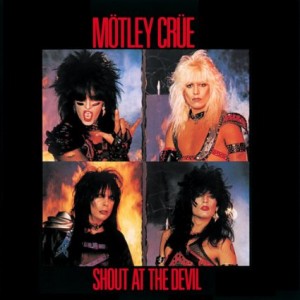 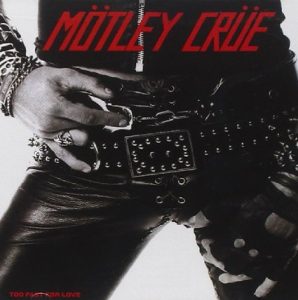 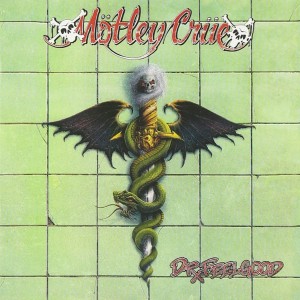 In some ways, it is surprising that Mötley Crüe‘s best selling album, Dr. Feelgood, which was certified six time platinum in the US and three times platinum in Canada, did not fare better in this poll. The album has four tracks — “Kickstart My Heart”, “Don’t Go Away Mad (Just Go Away)”, “Same Ol’ Situation (S.O.S.)” and the title track — that have remained mainstays in the group’s live shows all the way to the end. The Dr. Feelgood album is also notable since it’s the first one recorded with the band members supposedly clean and sober after many years of excess and debauchery. Perhaps one feature that held Dr. Feelgood from landing the top spot was the album’s slicker production at the hands of now renowned producer Bob Rock. Whatever the case, Dr. Feelgood remains a pivotal and important album for the band and for Sleaze Roxx readers as well since it reached the #4 position on the Top 12 Albums that have stayed with Sleaze Roxx readers survey. 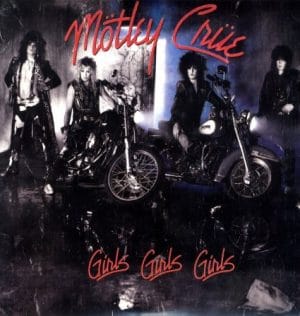 After doing a 180 degree turn from Shout At The Devil‘s chains and pentagram to Theatre Of Pain‘s ultra glam look, Mötley Crüe reinvented themselves once again by embracing their love of hard living, strip bars and bikes to recreate their “new” image to coincide with their latest offering Girls, Girls, Girls in 1987. The album produced two of Mötley Crüe‘s most identifiable, recognizable and memorable songs — “Wild Side” and “Girls, Girls, Girls” — which also remained mainstays in the group’s live shows all the way to the end. Girls, Girls, Girls was the third album in a row for Mötley Crüe to go quadruple platinum in the US cementing the group as one of the most consistent and successful group of the ’80s era in terms of record sales. Interestingly, Girls, Girls, Girls only received 1% of votes as the best Mötley Crüe album. Sixty percent of the votes that Girls, Girls, Girls received in this survey were for the # 4 or 5 position. 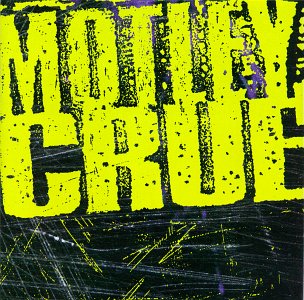 Replacing a lead singer is always difficult and to replace one as iconic and recognizable as the Californian blond frontman Vince Neil turned out to be a tough task indeed for Mötley Crüe. Rather than find a Neil clone, the remaining band members in Mötley Crüe brought in raspy voiced John Corabi and did another 180 degree turn with what is their closest sounding album to alternative metal or grunge. Not surprisingly, the album was a commercial failure compared to Dr. Feelgood and the three albums prior to that. However, the Mötley Crüe album has always been a love it or hate it type album so it is no surprise that it garnered the most votes as the best Mötley Crüe album along Sleaze Roxx readers after Shout At The Devil and Too Fast For Love. While many people may not consider the band’s self-titled album with Corabi to be a true Mötley Crüe album, the results from this survey say otherwise. 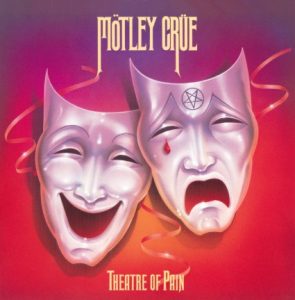 If you want to blame one band for getting most of the ’80s heavy metal bands to ditch their heavy metal roots and leather jackets for the glam look and make-up, Mötley Crüe are likely to blame with their Theatre Of Pain album. I still remember how shocked I was as a kid to see one of my favorite bands at the time do a complete 180 degree turn with both their sound and look. While there is no question that Theatre Of Pain is a solid album despite the change in musical direction and since it spawned one of the greatest ballads of all-time (“Home Sweet Home”), its ranking in this survey suggests that many Sleaze Roxx readers were disappointed with the album as a successor to the immensely popular Shout At The Devil. The humorous and silly video for Mötley Crüe‘s cover of the Brownsville Station‘s song “Smokin’ In The Boys Room” tells you all you need to know about the group’s direction on Theatre Of Pain. 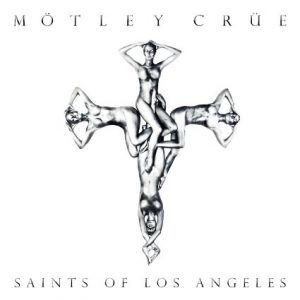 There is nothing harder for a band than to recapture the magic from years past but to Mötley Crüe‘s credit, they may well have achieved that with their last studio album ever released — Saints Of Los Angeles back in 2008. The album was loosely based upon the group’s very popular autobiography The Dirt. Had Saints Of Los Angeles been released back in the ’80s, it is likely that it would have joined the quadruple platinum selling ranks of other Mötley Crüe albums in the US. Of note, Saints Of Los Angeles did not place among the #1 or 2 album of any Sleaze Roxx reader who voted in this survey but it did receive 61% of the votes proving that while the album is definitely not considered Mötley Crüe‘s best record, it is definitely one of the best that the band has come up with. The album is also notable for the title track which became a staple of Mötley Crüe‘s live sets. 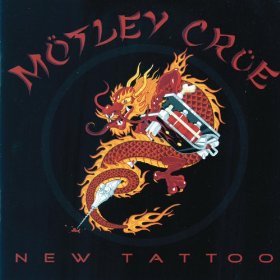 New Tattoo is the only other Mötley Crüe album that does not feature one of the original band members. This time around, it was drummer Tommy Lee that went missing in action. After serving some time in jail for an altercation with his wife at the time, model Pamela Anderson, Lee advised the rest of his Mötley Crüe bandmates that he would be leaving the group to focus on his own project Methods Of Mayhem. Lee was replaced with long-time Ozzy drummer Randy Castillo. While New Tattoo is widely considered a solid album, it likely never got its just due for reasons including the time when it was released. The album was also a commercial failure so it is not surprising that it would take an additional eight years for Mötley Crüe to release another studio album. 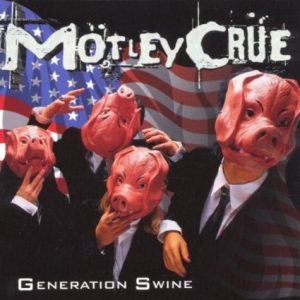 It’s no surprise to see Generation Swine as the last studio album among the favorite Mötley Crüe albums for Sleaze Roxx readers. Originally, the record should have featured John Corabi on lead vocals but due to a lot of pressure from many different sources, Vince Neil eventually rejoined the band and ended up being the singer on the album. Generation Swine finished last in just about every category in this survey with the least amount of possible votes (5%) and least amount of times mentioned by Sleaze Roxx readers in the survey (11%). If there is one album that Mötley Crüe and their fans might like to erase from the band’s history, it may well be the experimental sounding Generation Swine.