Sleazy RoXxX, the sleaze rock band with the cool name — did you expect anything else from a website called Sleaze Roxx? — have released a new video for the song “Catch The World” which is also the premiere with their new singer Paulie Weston. 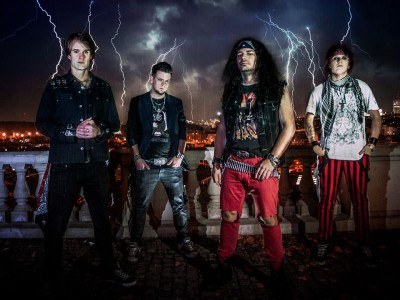 Interestingly, in September 2015, Sleaze Roxx reviewed Sleazy RoXxX‘s last album Dangerous Obsession, which was released in June 2014. Sleaze Roxx commented as follows in its review of Dangerous Obsession: “I am kind of on the fence about Sleazy Roxxx‘s Dangerous Obsession. Some of the songs or portions of them are really good, yet sometimes they really suck. A lot of these fluctuations have do with singer Lee Glambert‘s vocal delivery which is limited and definitely fits a lot better with the faster sleazy rockers that Sleazy Roxxx can deliver. While Lambert‘s voice is tolerable on the faster rockers, it is close to unbearable to listen to on the ballad type songs such as “Lima Sierra Delta” and “Live Fast – Die Young.”” Sleaze Roxx went on to conclude: “Sleazy Roxxx‘s Dangerous Obsession has enough really good parts to make it worthwhile to listen to but it won’t be setting the world on fire for best record of the year. I think that Sleazy Roxxx have the potential to deliver a much stronger record, which will depend a lot on how they can maximize the good elements of Glambert‘s limited vocal delivery to the fullest.”

Funny enough, unbeknownst to Sleaze Roxx at the time of its review of Dangerous Obsession in September 2015, Sleazy RoXxX‘s lead vocalist Lee Glambert had just left the band in August 2015. In fact, the line-up for Sleazy RoXxX has undergone a major makeover since the release of Dangerous Obsession since only bassist Jan Vandervell remains from the line-up that played on that album. Rounding out the new Sleazy RoXxX line-up is Weston on lead vocals, James Dinner on guitar and background vocals, and Vinnie Cage on drums and background vocals.