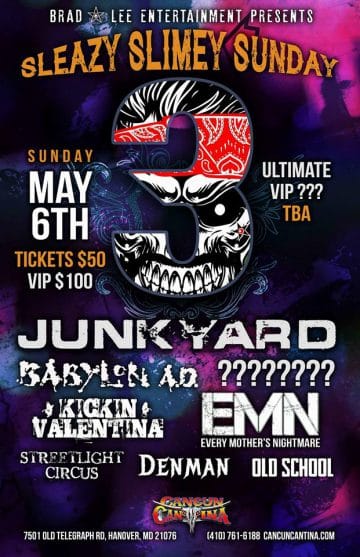 While the M3 Rock Festival in Columbia, Maryland, USA continues to hold off on announcing its line-up for its tenth edition, two of the premiere events prior to and after the festival have announced all or the majority of their respective line-ups.

The ninth edition of the M-Pre Party is all set for May 3, 2018 at Sonoma’s Bar & Grill in Columbia, Maryland, USA and will feature the following bands: Wildstreet (performing for the third time), Mad Margritt, White Trash Stars, Shokker (for the second year in a row) and Babylon Shakes (whose frontman Chris Clark is playing the event for the third time).

Sleazy Slimey Sunday is returning for its third edition via Brad Lee Entertainment at the Cancun Cantina in Hanover, Maryland, USA and has announced the following bands so far: Junkyard, Babylon A.D., Kickin Valentina (for their third year in a row), Every Mother’s Nightmare, Streelight Circus (for the second year in a row), Denman and Old School. Tickets go on sale for the event on January 5, 2018.

Anyone who has followed sleaze rock in the ’80s and ’90s likely needs no introduction to Junkyard. The group’s first two albums — Junkyard (1989) and Sixes, Sevens & Nines (1991) — are two fantastic records that should be a part of anyone’s collection. The band came back strong this year with High Water, which is its first album with original material in more than a decade.

Sleaze Roxx caught Junkyard playing live at the 2016 edition of Rock N Skull and stated as follows in its concert review: “One band that I was really looking forward to seeing play live was Junkyard. They play the kind of grittier type of rock n’ roll 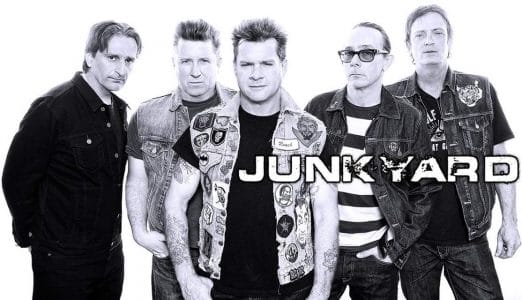 that I prefer and I had heard that they put on a strong live performance. Junkyard didn’t disappoint starting strong out of the gate and never letting up. Although I recognized most of the songs, naming them is a real challenge. After years and years of seeing the band members’ pictures, it was neat to finally see them in the flesh.”

Sleaze Roxx ended its review of Junkyard‘s performance by stating: “It was pedal to the metal the entire time. At one point during one of the songs, [David] Roach put his microphone down near the end of the stage before hopping one of the side barricades and casually walking into the VIP section right in front of the stage. Roach grabbed his microphone from the stage and went to the back of the VIP where he stood up on one of the barricades singing to the general admission audience. A nice touch from Roach to change things up a little bit during Junkyard‘s set. There is no need to say that there was a sizeable crowd to see Junkyard play. Overall, Junkyard put on a strong performance that pretty much lived up to my expectations for them.”

JUNKYARD “Cut From The Same Cloth”

From the album, “HIGH WATER” available on Acetate Records (http://www.acetate.com). Check out http://junkyardblooze.com for tour dates and more info. Shot a…

Similar to Junkyard, Babylon A.D.‘s first two albums — Babylon A.D. (1989) and Nothing Sacred (1992) — should be a part of any sleaze rock lover’s collection and the group has come back strong this year with its new album titled Revelation Highway. Sleaze Roxx also caught Babylon A.D. live at the 2016 edition of Rock N Skull, ranked their performance at number four out of 31 sets and stated as follows in its concert review: “One group that I actually discovered later in life is Babylon A.D. and I don’t know why because they play the kind of music that I just love. After having given Babylon A.D. a glowing review of their live album Live@XXV, there is no need to say that I was really looking forward to their set. Babylon A.D. took the stage and proceeded to kick everyone’s ass in the audience. They were that good. The band members exuded tons of energy and had great stage presence. It helps to have simply amazing songs to play. I would have liked to hear a few more songs from 1992’s Nothing Sacred, which was largely ignored on this night but I get that people identify and enjoy the songs from the band’s self-titled debut album. I also understand that “Bad Blood” from the Nothing Sacred album may have not been played due to time constraints.”

Atlanta, Georgia sleaze rockers Kickin Valentina have received strong reviews from Sleaze Roxx for all of their releases so far — Kickin Valentina EP (2013), Super Atomic EP (2015) and their latest album Imaginary Creatures (2017) — but have yet to place on any of Sleaze Roxx‘s year end “best of” lists. Will this be the year to break that streak for Kickin Valentina? 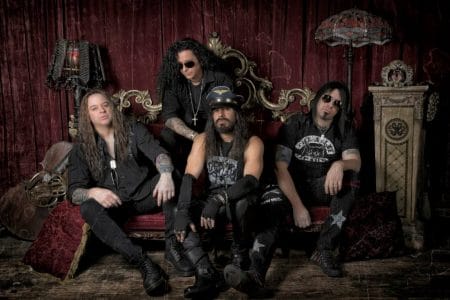 Sleaze Roxx stated the following in its review of Imaginary Creatures: “Enough hype… I like the Kickin Valentina release — a lot! Hearing influences from Whitesnake to Cinderella, there really are some killer deep cuts on Imaginary Creatures. “Heartbreak” for example, drips with attitude and gives a solid performance from all instruments. Some tracks, like “Burning Love” drop into Little Caesar territory — kind of punk meets a ’50s sensibility. But hell, “Eyes”, “Turn Me On” and “Devil’s Hand” offer me a great hard rock experience. “Eat N Run” stands out for me as a fantastic song that I would love to see live sometime. I’m feeling pretty solid on recommending Imaginary Creatures. It’s a must have for those that appreciate a new spin on what us ’80s guys now refer to as a classic “sleaze rock” sound. Again, think of some of the newer bands that Sleaze Roxx targets. This album is the real thing.”

Kickin Valentina‘s “Turn Me On” video:

Tennessee, USA rockers Every Mother’s Nightmare recently signed with HighVolMusic and released a new album this year titled Grind consisting of the songs from their Grind EP, a few new tracks and a few live ones.

Every Mother’s Nightmare‘s “Biography” on their Facebook page states: 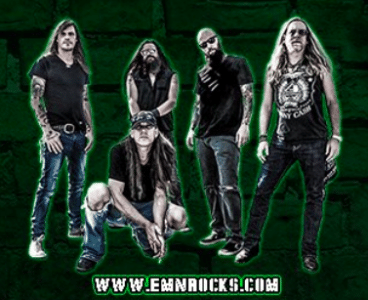 “Forming in the early 90’s, Every Mother’s Nightmare is no stranger to the music scene. After quickly arriving on the Memphis rock scene, word spread about their energy-packed live performances gaining them the attention of Clive Davis (Arista Records). After signing with Arista, Every Mother’s Nightmare became staples on MTV’s Headbanger’s Ball with their music videos for “Walls Come Down”, “Love Can Make You Blind”, and “House of Pain”.

Every Mother’s Nightmare received a great deal of national press and toured, promoting the first two albums, allowing them the chance to open for bands such as Cheap Trick and Dream Theater. They performed many headlining shows, drawing in large crowds and selling out venues. Every Mother’s Nightmare has been featured in hundreds of hard rock magazines both nationally and internationally like Metal Edge as well as appearing on shows like the Joan Rivers’ talk show.

Every Mother’s Nightmare is releasing their highly anticipated full-length album titled ‘Grind’. ‘Grind’ includes “Loco Crazy” which features a guest appearance by Zach Myers of Shinedown on guitar with a companion video. The project also features appearances by Jim Dandy (The Jim Dandy) guest vocals on ‘Stand Up’, and Wayne Swinny (Saliva) guitar on ‘Snake’.” 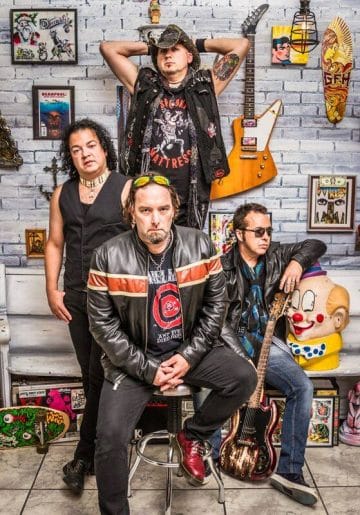 New York rockers Streetlight Circus are back for a second straight year at Sleazy Slimey Sunday and are still riding high with their very good record Needle Down, which was released back in October 2016.

Sleaze Roxx stated the following in its review of Needle Down: “With the exception of Hessler‘s new EP Skeleton Crew, I have been guilty of listening to quite a few new albums without coming up with any reviews. One of those new records is from Streetlight Circus who with Needle Down have come up with an album which reminds me of a cross between vintage and late ’80s/early ’90s era Alice Cooper. Before you get all excited, Streetlight Circus don’t really sound like Alice Cooper and you won’t mistake frontman David Shaw‘s singing for the shock rocker’s vocal delivery in any way but the variety of songs displayed on Needle Down remind me of those classic Alice Cooper albums that were filled with many different styles all rolled into one record. Streetlight Circus aren’t reinventing the wheel with Needle Down but provide some good time rock n’ roll mixed with strong melodies that will have you singing along or at the very least enjoying the sometimes rather simple grooves.”

Sleaze Roxx concluded its review of Needle Down by stating: “Streetlight Circus have delivered a solid slab of good time rock n’ roll with enough variety to keep anyone interested. It’s not the kind of record that will knock you over on the first listen or even second listen but it’s an album that every time you listen to it, odds are you’ll notice something new that you really like that you might have overlooked beforehand. In other words, Needle Down will grow on you the more you listen to it just like those classic Alice Cooper albums that were just too good to appreciate on just one listen.”

Nashville, Tennessee, USA rockers Denman represent the very new breed of rockers at Sleazy Slimey Sunday who however bring a very familiar sound to the table. The group is hard at work on its debut full-length album with renowned producer Michael Wagener and has released a very good EP titled The Life We Live earlier this year. 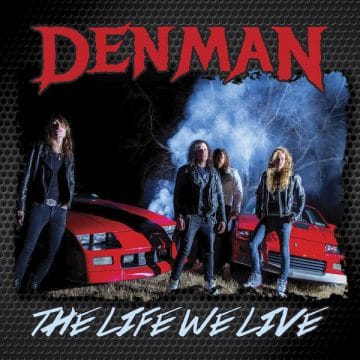 Sleaze Roxx stated the following in its review of The Life We Live: “It’s hard to put a finger on who Denman sound exactly like. Guitar wise, the brothers are like a mix of Zakk Wylde and Paul Gilbert. Vocally, Ben‘s vocals are a little bit lower and more baritone than the average hair metal band. However, it still sounds like an authentic ’80s vocal. The album, produced by the legendary Michael Wagener, sounds as ’80s as the first Skid Row album, and even features a cameo from Mark Slaughter. The songwriting is exactly what’d you expect from a slightly heavier glam band of the era. There are some slight thrash influences, but for the most part, it’s wild hair metal guitars and big vocal hooks making for catchy songs about driving fast, partying, and women. 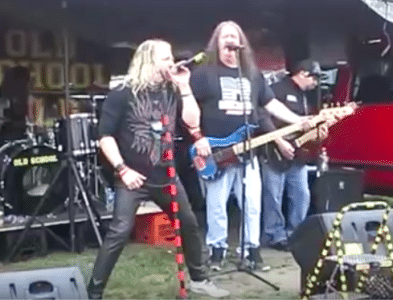 Admittedly, Sleaze Roxx does not know much about Old School given that they mainly play cover songs while setting up camp on a yearly basis in the M3 Rock Festival parking lot and reportedly helping to put on a hell of a tailgate party.

OS puts on an arena style show with every performance. We are seasoned and professional veterans of the local and national music scene. We were a finalist in the WMGK house band competition for 2011. The band is based out of suburban Philadelphia.”