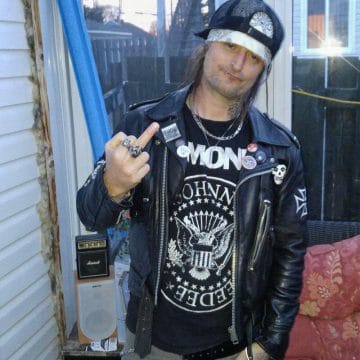 The following message was posted on Sleazy Way Out‘s Facebook page on August 4, 2017:

“Hey sleazers! Please join us in giving an official welcome to our new drummer…. We posted that he was part of the bands last will and a lot of you were asking who he is…well…here he is… The man himself… Joey Boucher!

Joey made his debut with us on Sunday, playing with Faster Pussycat and kicked some serious ass! We are looking forward to our upcoming shows and also getting into the studio to finish our second album. Welcome to the band Joey!”

Sleaze Roxx stated the following in its review of Sleazy Way Out‘s Satisfy Me album released back in early 2015: “There are some noteworthy points to Sleazy Way Out‘s sound, and the songwriting is simple straight-ahead fun driving hard rock — no fillers nor ballads are to be found on Satisfy Me. I might also add that the band’s songs contain arguably better hooks than most other new bands of the ‘sleaze’ genre. Guitar fans will find plenty of tasteful chops to steal and the solid drumbeats and bass lines are slammin’. Most notable are the songs “Born To Booze”, “Hotter Than Fire” and “Voodoo Queen” that formulate the lethal mix of pop-metal with a bluesy punch reminiscent of latter Cinderella.”