Sleazy Way Out guitarist Cleve was recently interviewed by French publication Hard Rock 80 and spoke about the group’s plans in terms of following up their critically acclaimed album Satisfy Me, which was released back in early 2015. 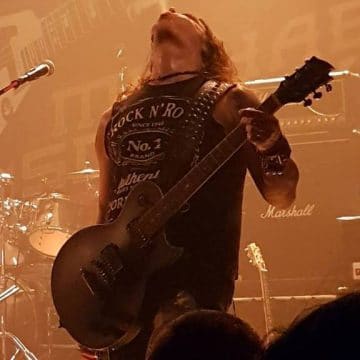 Cleve stated (as transcribed by Google): “It makes me happy that you ask me this question! We are currently in pre-production phase for our second album! Stacey and I were busy doing the demos together and as a band we worked on the songs in different ways to make them cool. We have 20 loan titles that we will record and we will take the best of the lot. We let people listen to some excerpts and have already played some new songs in concert. We have had good feedback from people who find the news catchy and a little heavier but they are the type of stuff expected from Sleazy Way Out. We did not reinvent the wheel or become a fucking prog group. We write catchy things on the picole, the sex, the strippers, do the job …. All the shits of a sleaze group!”

In terms of whether it’s difficult to tour in Canada and whether there are other Canadian groups worth listening to, Cleve opined (as transcribed by Google): “This country is so big and wide, it’s really hard to tour without worries. But we have many followers in the east of the country. We play often in Quebec, in Ontario and in the Northern States. We signed a deal with a label in Europe to be distributed and represent us. It is very likely that you hear about us and even see us by home soon! There are lots of bands playing rock / metal here in Quebec. This corner is especially famous for its Death Metal scene. But there are bands like Rusted, Playhouse and Cowboys Meets Pirate that perpetuate the hard flame at home. It’s our buddies and they are fucking good bands!”

You can read the rest of the interview with Sleazy Way Out guitarist Cleve in French at Hard Rock 80.