Canadian rockers Sleazy Way Out consisting of frontman Stacey Sleaze, guitarist Cleve, bassist Xavier and drummer Joey Boucher will be releasing their sophomore album Here Comes Trouble within the next two months via Latvia based Sliptrick Records. Sleaze Roxx is honoured to premiere the album cover and track list for Here Comes Trouble. 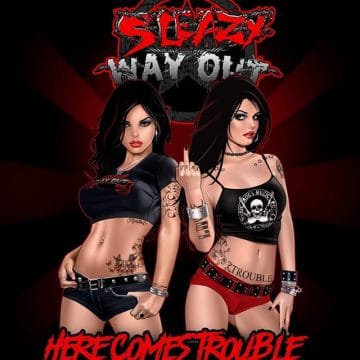 Sleazy Way Out‘s frontman Stacey Sleaze was interviewed by Sleaze Roxx earlier this month and the singer spoke about how the new album compares to the group’s debut Satisfy Me. Stacey Sleaze indicated: “There was 11 songs on the album ’til last minute. Now, theres 12. We just decided it’s been almost five years since the last album so let’s put 12 songs on it. At first, we wanted to keep a couple songs as “secret” or “bonus” [tracks] but then, after that long, “Fuck it! Let’s put 12.” This time, we produced the album, so I guess it’s more us. Personally, I like the new album better. Maybe, it’s just the experience of writing together. I dont know but I think it’s more catchy. The songs are way better than the first album.”

Satisfy Me dates back to early 2015 and Stacey Sleaze outlined how long it took to write the songs for and record the new album as he stated: “Finally, it’s gonna be released. It’s been a long process. It’s been a nightmare [laughs]. I’m not gonna go in the details but it’s been a year and a half since we started recording. At first, it was supposed to be one producer who asked to work with us and all of a sudden, didn’t wanna do the job. So we had to start all over again from scratch. As for the writing, Cleve and I can write fast. The chemistry between him and I is so there. He comes up with a riff and I come up with the melody almost instantly. By the way, that’s what we did last jam, ’cause yeah, we are already started working on the next album. But that’s what we do. We don’t have a “writing period.” We write whenever we are inspired. When it was time to record the second [upcoming] album, we had 25 songs, and we picked 12 out of them.”