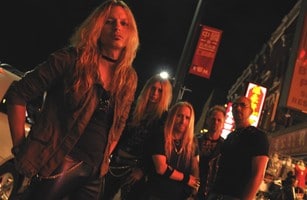 Canadian metallic hard rockers Famous Underground has just inked a world-wide two album deal with German label Dust On The Tracks Records. The debut album, which is slated for April 2013, will be released through Sony (Europe), MVD (USA), RSK (UK) and Universal (Canada).

Famous Underground, and former Slik Toxik, frontman Nicholas Walsh says, “It’s great to know that our music can reach many people. We had multiple labels interested in the band, and ultimately went with DOTT due to their understanding of our music and how and where it needs to be exposed.”

Bassist Laurie-Anne states, “Under the stable of Rock ‘n’ Growl Management and DOTT Records we feel that we have a great team to propel us forward into the New Year.”

Famous Underground’s sound and music is edgy, melodic and hooky bringing a paradigm shift to the arena of rock. It’s been said that they have created something fresh and exciting in an otherwise stagnated genre. With the conclusion that no-one has definitive comparisons, Carl Begai, writer with elite hard rock/metal magazine BW&BK, describes the new recording as “it’s a darker if-Metallica-were-Guns-N’-Roses direction with this brand new album.”

Famous Undergound’s self-titled studio release was produced by Nick Walsh and mixed by Darius Szczepaniak (Sum 41, Black Crowes, Big Sugar, Sacrifice) at Rouge Valley Studio in Toronto. The new recording takes Walsh’s writing to a more defined state where the lyrics delve more into the complexities of the real world.