Slik Toxik reunion? — Ex-band drummer Neal Busby lets Nick Walsh know he would do it in a heartbeat

Former Slik Toxik drummer Neal Busby along with ex-Slash Puppet bassist Pete Dove were recently interviewed by Tyson Briden on the new podcast Non-Stop Rock Talk with Tyson Briden. In the podcast’s debut episode, Busby and Dove spoke, amongst other things, about the resurrection of their band Chyld. 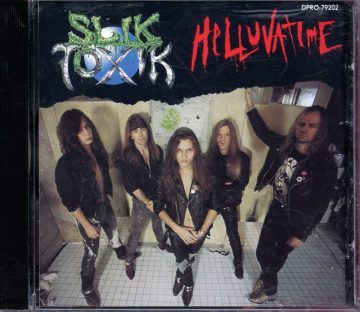 In an off the record portion of the podcast, Busby stated the following about a possible Slik Toxik reunion: “I decided to continue with Chyld because I am still able to do this type of music and have the energy at this time of my life to continue for some time. There are lots of guys older than me out there reforming bands and doing quite well. Most importantly having fun doing it. If Nick Walsh wanted to reform Slik, or put together a version of Slik, I would do it in a heartbeat. Slik Toxik gave me a name in the music business and the business of Slik Toxik is unfinished. We were given a raw deal and people want to see us do it again. How about it Nick? Maybe it’s time for a Helluvatime!”

Back in 2015, Slik Toxik‘s hard to find album Irrelevant was re-released via Perris Records. In an interview with Sleaze Roxx back in October 2015, Slik Toxik frontman Nick Walsh was asked whether there would be a Slik Toxik reunion to commemorate the re-release of Irrelevant to which he replied: “At this juncture, the answer would be NO. We are all so busy with other projects and prior commitments. As you know already about the various things I am involved with, Kevin Gale has his band Punishment and Neal [Busby] is involved with his project Twirl. We never know what the future will hold, as the possible interest in the band may build and with that usually opportunity follows. If anything is thrown our way, it’ll be at that time [that] we may have to seriously consider it.”

Of note, guitarist Kevin Gale is no longer in the band Punishment and has his autobiography in the works with Tyson Briden writing the book.

You can listen to Episode One of the podcast Non-Stop Rock Talk with Tyson Briden via the Buzz Sprout website.

Official Video for the Slik Toxik song ‘Helluvatime’ taken from the album ‘Doin’ the Nasty’. Originally released in 1992 by Capitol Records/EMI CanadaDirecto…