Slizzard Lizzard frontman Emmo’s experience on “The Voice Of Germany”

German hair metal rockers Slizzard Lizzard‘s frontman Emmo recently competed on the casting show “The Voice Of Germany” and came very close to getting selected by the judges. 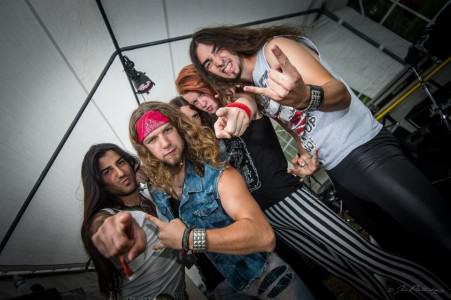 Emmo described his experience as follows: “So I had to overcome many obstacles (between over 10.000 further candidates) only to make it to the main stage on TV what they call ‘Blind Audition.’ There I got sick and couldn’t be able to convince the jury that much. But the actual reason for not taking me was the fact that I was at the fourth and therefore last day of the ‘Blind Auditions’ so that only one Coach had one place for a talent. Actually two coaches almost got that angry and disappointed ’cause they wanted to take me but they had their teams full. So after me, six talents performed their song whereof they took the last one for ‘fairness reasons.’ All in all, the whole thing escalated somewhere because the coaches got shitstormed on Facebook because they didn’t take me. On one hand, that was pretty flattering but on the other hand, I was so sorry. I was also sorry that I couldn’t meet the expectations of my friends, family and potential fans who watched. One further positive thing was that the crowd elected me for number one on a survey refering “Who is the best singer of the second ‘Blind Audition.'” So this almost plucked my heartstrings. After this, me and my band got many requests… and some serious contacts but we, on our own, also were fighting hard to get to the right people to support and promote us.”

More information on Slizzard Lizzard can be found on the band’s Facebook page.