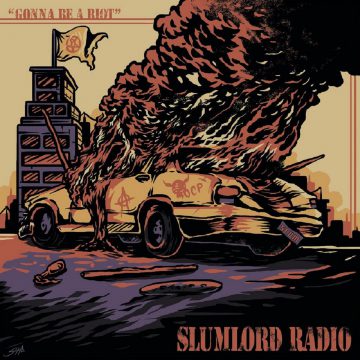 Grand Rapids, Michigan, USA based rockers Slumlord Radio consisting of lead vocalist / guitarist Tommy “Capt. Hollywood” Erickson, bassist Michael “The Westside Wolfman” Todd and drummer “Rattlesnake” Matt Claucherty have released a new single titled “Gonna Be A Riot.” The b side to the single is a cover of The Stooges / Iggy Pop‘s “I Wanna Be Your Dog.” You can listen to and purchase the new songs at the group’s Bandcamp page.

The band describes itself as follows on its Bandcamp page (with slight edits):

“Formed in the slums in ’10. Scuzzy and fuzzy w/ a side of fancy. The devilicious handsome quartet, bashes out the rock as if they were a dirty version of Rush. Just some good ol’ action rock/stoner/punk n roll for the kids, cuz givin’ back is what it is all about.”

Slumlord Radio – Gonna Be A Riot

Slumlord Radio‘s cover of The Stooges / Iggy Pop‘s “I Wanna Be Your Dog” song: