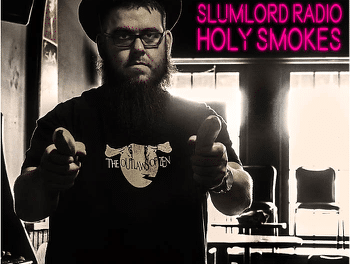 Granted, Slumlord Radio‘s video for “Holy Smokes” was released back in early October 2017 but this is the first time that Sleaze Roxx hears about the Grand Rapid, Michigan, USA rockers. 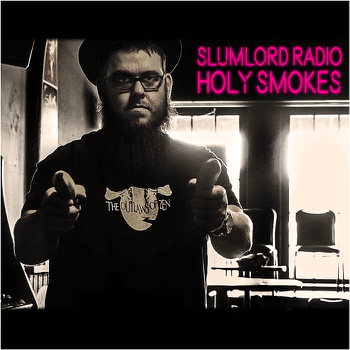 Slumlord Radio‘s “Biography” on their Facebook page states (with slight edit): “Let us start from the beginning. Slumlord Radio was formed 2010 in Grand Rapids, MI. The members all met in a building owned by the infamous Stevie “Slumlord” and in his honor, decided to name the band after him. Falling behind in gambling debts big time to their bookie Chris “Big Rig” Riggie (now manager), they decided to form a band to make some big bucks. Comprised of former Scandinavian models and over-the-road truck drivers, Slumlord Radio spent many hours honing the rowdy, raw action rock sound they were chasing. The music is a loud frenetic mix of punk, hard rock, metal, stoner rock, with some good ol’ Detroit scuzz thrown in for good measure (ok and some rough pop melodies for their moms too!). As far as the live show, Slumlord Radio’s onstage drunken swagger, scruffy Midwestern charm comes through in spades. Often playing with a reckless abandon of a bear ripping through a camper looking for food, the shows are always a high energy affair! The Let us start thunderous trio, have played many of the finest dive bars in the world.”

You can purchase the single “Holy Smokes” at the group’s Bandcamp page.