New Swiss glam rockers Smoke ‘N’ Flame have released their debut video for their song “You Rock My Heart.” 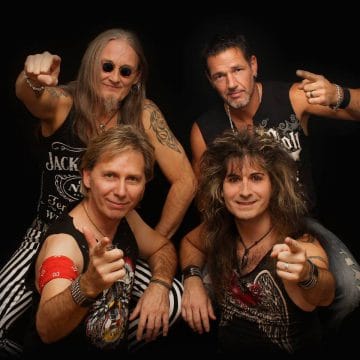 The group’s “Story” on its Facebook page states (German translated to English via Google and with slight edits):

“Smoke ‘N’ Flame emerged from the “rubble” of Firemoon.

Alex, Crazy Harry and Beat wanted to do something new. That’s how they founded Smoke ‘N’ Flame.

The style has not changed much. Classic 80s Hard / Glam Rock, which is a bit more sophisticated and technically sophisticated.

Alex is the band genius. An incredibly talented man! Not just a world-class guitarist and songwriter, but also a painter, photographer, computer cracker, and, and, and … who knows what else he’s got! 😉

Crazy Harry is the visionary and “girl for everything”. He’s bubbling with ideas, and whatever happens, he’s pushing forward. There may be technically better singers, but there is rarely a more outspoken and rousing front man on a stage.

Beat is exactly the type you need in this constellation. An absolutely solid drummer, musically as well as personally the foundation of the band. His inputs and accents are always placed exactly right.”