Smokin’ Aces debut video for “You Take My Breath Away”

Finnish rockers Smokin’ Aces have released a video for their song “You Take My Breath Away” from their debut EP 24/7.

Sleaze Roxx stated the following in its review of Smokin’ Aces‘ 24/7: 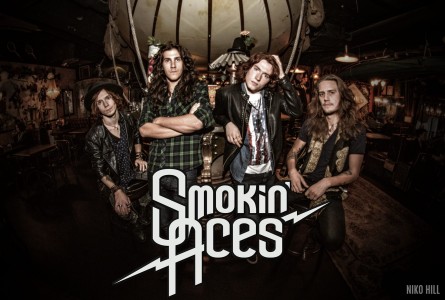 “There are a number of rockers exploring a plethora of styles on 24/7, and every one does its job perfectly. “The Ruckus” is a loud GN’R-soaked, slightly bluesy, metal anthem that makes for a nice opener. The title track is the shining star on this EP, combining pop-metal with loads of hooks and fun to keep you coming back for more, while “Hooked On You” is another extremely catchy and rowdy anthem. The EP is full of shredding, gang vocals and a pounding bass and drum section with frontman Anthony Dawoud‘s powerful and ferocious raspy pipes rounding out Smokin’ Aces songs quite nicely.

This is raw, aggressive barroom rock with just enough of a bluesy edge. The songwriting skills out of the gate already prove that this young band has talent oozing from their pores, and we’re expecting big things from Smokin’ Aces in the years to come. With this blistering release, Smokin’ Aces prove from the get go that they mean business.”

24/7 also landed the top spot album in 2015 for Sleaze Roxx writer Terry Martinson who stated the following in the Sleaze Roxx Writers’ Top Five Albums of 2015:

“Even though I did not get an opportunity to pen my thoughts in long form for Smokin’ Aces‘ 24/7 EP, it is by far my favorite five songs of the year. A tasty smattering of fist pumping rockers about girls, drinking and fighting and an epic “December Rain” styled ballad in “You Take My Breath Away” that will have every pubescent teenager swearing that the song is written for them (think “Open Arms”). Smokin’ Aces‘ 24/7 is a must for fans of Spread Eagle meets Tesla styled hard rock and man, I cannot wait for the next instalment!”

Smokin’ Aces – You Take My Breath Away (Official Video)

LYRICS: A lady you could touch, but you wouldn’t be near, speak through your heart but she still wouldn’t hear, she’s got a smile that could make the world d…