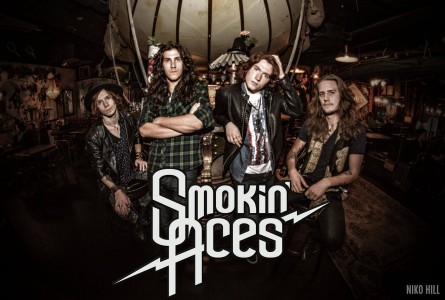 Lions Pride Music made the following announcement on its Facebook page yesterday (with slight edits): “Lions Pride Music is proud to have signed Finnish new melodic hard rock sensation Smokin’ Aces. The band is the new generation of bands to take this genre to the next level. The band have gained a strong following in their homeland and now going to break into the international scene on a wider scale. The band consist of Anthony Dawoud – Guitar & Vocals, which comes across like a strong blend of Mats Leven‘s and Conny Lind‘s voices in one, Julian McGourty – Guitar, know his way around his six string, Eemi Lamberg – Bass, and Jarno Jussila – Drums, which lays a strong rhythm foundation. Band is promised to rock your socks of and more. More news to follow shortly on the bands release.” 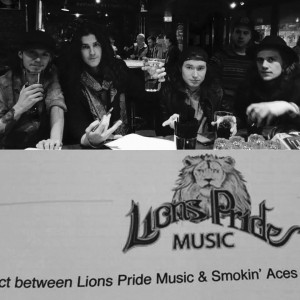 Sleaze Roxx stated the following in its review of Smokin’ Aces‘ EP 24/7: “Having a bad day? The remedy might be quite simple, just stick the Smokin’ Aces EP into your player and press play. The magic that happens is instantaneous as the air is filled with soulful and infectious fun rock. Just when the home-country sleaze kings Santa Cruz turned their musical sites to thrash and metal-core, we have yet another new Finnish band come out of left field and knock it out of the park when nobody was looking. The Smokin’ Aces‘ sound is fresh, heavy and powerful — drawing influences from Guns N’ Roses and Skid Row‘s debut with happy melodic overtones that get your foot tapping and have you humming along before you know it.”

Smokin’ Aces‘ album 24/7 landed the number one spot on Sleaze Roxx writer Terry Martinson‘s top five albums of 2015. Martinson stated the following in that regard: “Even though I did not get an opportunity to pen my thoughts in long form for Smokin’ Aces‘ 24/7 EP, it is by far my favorite five songs of the year. A tasty smattering of fist pumping rockers about girls, drinking and fighting and an epic “December Rain” styled ballad in “You Take My Breath Away” that will have every pubescent teenager swearing that the song is written for them (think “Open Arms”). Smokin’ Aces‘ 24/7 is a must for fans of Spread Eagle meets Tesla styled hard rock and man, I cannot wait for the next installment!”

Opening track from 24/7 EPTracks:1. The Ruckus2. 24/73. Hooked On You4. Tomorrow We Die5. You Take My Breath Awaybuy the EPPhysical: http://www.recordshopx.c…

Smokin’ Aces – You Take My Breath Away (Official Video)

LYRICS: A lady you could touch, but you wouldn’t be near, speak through your heart but she still wouldn’t hear, she’s got a smile that could make the world d…