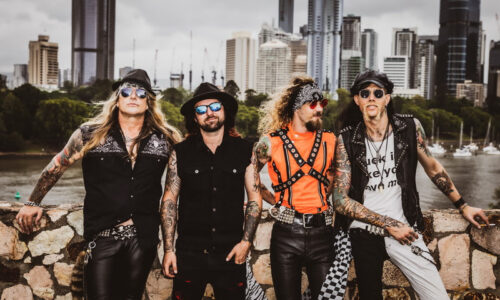 “Australia’s number one heavy outlaw sleaze rock band, Snake Bite Whisky, release the third single and video off their critically acclaimed second album, Black Candy which was released globally by Sliptrick Records (Europe) on the March 30th, 2021. Creep Show is a celebration of the outcasts of society, the weird and wonderful, strange and sexy. The song sonically twists from outlaw country style vocals on the verses to sleaze metal in the pre-chorus and chorus. The video itself is full of striking black and white visuals and outlandish, dark, sexy characters cavorting to the lounge band from hell. Evocative imagery pulls from classic horror tropes to portray the over the top insanity of the Creep Show and is the sleaze rock anthem for Halloween.

The band states, “We wanted to do something different than our other video’s in style and tone and make it creepy and sexy. The song is about being different and subcultures that exist outside of the mainstream which is where we and a lot of our fans exist so this is for them”.

The video was shot by Josh Hickie and directed by Kyel Golly of the No.One Network who has directed the band’s previous video’s for Down In The Dirt, Last Man Standing, Hammered and Choke. Original band member, Nick Dysart returns on guitar for the video with the departure of Laggy from the band prior to the video being shot. The clip was filmed on location in Brisbane, Australia and features performances by Australian models Kannibal Kat, Heaven Arici, Jade Nightshade, K Belle and Harley.”