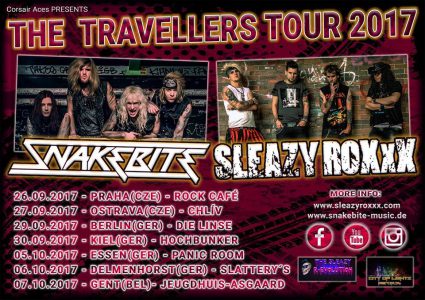 Snakebite‘s Princess Of Pain album reached #4 on the Sleaze Roxx’s Top Ten Albums of 2015 to which Sleaze Roxx stated: “If you’re longing for that ’80s sound, look no further than Snakebite who delivered one of the year’s strongest records full of melody, catchy hooks and that certain European flair with Dominik “Nikki” Wagner‘s singing. There’s probably nothing that you have not heard before at some point on Snakebite‘s Princess Of Pain but the group puts everything together in a strong package and if you like one song, odds are you will like them all. For whatever reason, I really like Wagner‘s voice and it’s almost hard to believe that he wasn’t even the lead singer in his prior band. Germany is well represented and has a bright future in the hard rock scene with Snakebite at the helm. Interestingly, the German rockers have shied away from the “sex, drugs and rock n’ roll” mantra opting for more positive uplifting messages.”

Sleaze Roxx stated the following in its review of Sleazy RoXxX‘s latest studio album Topless Suicide: “Overall, Sleazy RoXxX have come up with a very good effort in Topless Suicide, which is miles above what they offered with their previous album Dangerous Obsession. To me, the most surprising aspect of Topless Suicide is the strong melodies throughout which gives the album a melodic rock edge while retaining the sleazy aspect that you know Sleaze Roxx always likes!”