Snakebite bassist Alex Lacroix and drummer Julian Fischer were recently interviewed by Italy’s Melody Lane. The band has released two full-length albums consisting of Princess Of Pain (2015) which finished at #4 on the Sleaze Roxx’s Top Ten Albums of 2015 and Rise Of The Snake (2018). The duo were asked about what they consider their greatest accomplishments with their band so far. 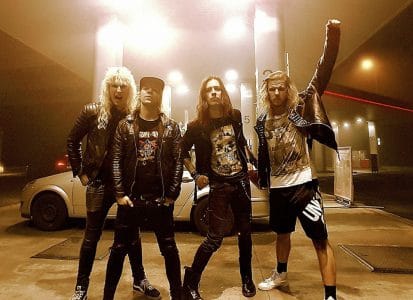 Lacroix advised: “I would go for the release of both of our albums as the biggest achievements to date, because that opened many doors for us and set the stage. For the near future we got some pretty awesome festival gigs planned across Europe and recently we’ve begun writing songs for the next album.”

Fischer indicated: “The biggest achievement for me this year is that we haven’t organized one gig by ourselves but got booked, with overall good conditions. Last year the bulk of our record release tour was booked by ourselves. So the interest in Snakebite seems to be growing, not only by music fans, but also from the organizer‘s side. Managing tours by ourselves is tough and takes a lot of time so I’m happy to focus on other things this year, for example the writing of our next record. This will be my next achievement too – another good record and growing naturally with it, step by step.”

Fischer also spoke about the sound and production of Snakebite‘s two full-length albums as he indicated: “Although we believe Rise of the Snake is the better album, Princess of Pain is still great to us. I know there are a few people complaining about the sound and production but those people just don’t get what Snakebite is all about. You know, some bands try to look like from the 80’s, but when it comes to the songs and production they’re all frightened of sounding not modern enough. When they discovered us, fans and positive reviewers where like that sounds like from the 80’s but I can’t tell which band it is“. That’s what we wanted to achieve. The production is big like in the 80’s but without the plastic sound and loudness war of today’s music.With Princess, we aimed for the production-style of the mid 80’s, Dokken’s Under Lock and Key for example. It’s just not en vogue anymore. Rise of the Snake sounds more like 1989 and that’s the reason why it is more okay to the average listener of modern rock music. Besides, Dennis Koehne was the audio engineer for both records and he knows what he’s doing.”

You can read the rest of the interview with Lacroix and Fischer at Melody Lane.