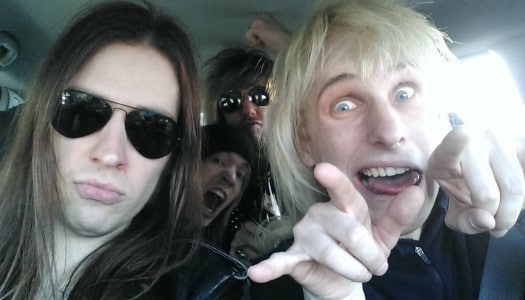 German rockers Snakebite have released a live video of their song “We Rise” which they played at Turock in Essen, Germany on April 8, 2016. The song “We Rise” is one of ten tracks on Snakebite‘s debut full-length album Princess Of Pain, which was released back on March 27, 2015.

Sleaze Roxx stated the following in its review of Princess Of Pain: “Many listens later and I am just loving Princess Of Pain. There are so many things to like about Snakebite. Uncomplicated catchy rock n’ roll, great melodic guitar solos, a lead singer’s voice that I absolutely love and a tight rhythm section are just a few of the many great things about the band. What more can an ’80s heavy metal music lover ask for? The best tracks are actually deep into the album. Songs such as “Bound To Lose” and “All Or Nothing” are a pure joy to listen to and instantaneously get my attention each time that I play the album. The two possible knocks on Princess Of Pain — which is also what makes the album so good — is that firstly, the songs aren’t overly complicated and might sound a bit generic to some. However, I have always been a proponent that a good song is a good song, and Snakebite simply deliver song after song. Secondly, there is no song that really stands out above the others as that obvious “hit” song. Nevertheless, if you are into one great straight forward song after another without needing the “big” hit, Princess Of Pain will most likely deliver exactly what you need.”

Snakebite‘s Princess Of Pain ended up as the number four album on Sleaze Roxx’s Top Ten Albums of 2015.