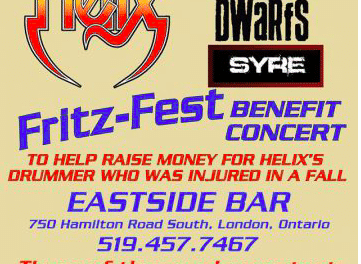 Who says Helix isn’t loved in their hometown? Helix may have penned the song “Even Jesus (Wasn’t Love In His Hometown”) but they along with their drummer Greg ‘Fritz’ Hinz are definitely getting some love this time around as the group’s benefit concert for Hinz at the Eastside Bar in London, Ontario, Canada on January 18, 2019 is already sold out. 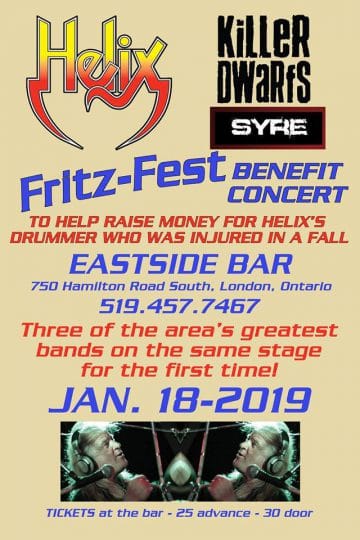 Back on November 12, 2018, Hinz suffered a number of fractures including a fractured skull when he fell off the roof of his house. A Go Fund Me campaign was started eight days ago to raise some funds for the Helix drummer while he starts his long road to recovery.

Helix decided to host a benefit concert called Fritz-Fest to assist in raising funds for Hinz and the response has apparently been overwhelming from the sold out concert to the bands willing to take part. Three legendary Canadian bands will be playing at the Fritz-Fest consisting of Helix, Killer Dwarfs and Syre.

Sleaze Roxx has had the opportunity to see Helix play live on numerous occasions during the last few years. Sleaze Roxx stated as follows on its review of Helix‘s live gig at The Ranch in Barrie, Ontario, Canada back in April 2015:

“What did surprise me was how much I enjoyed some of the other songs played during the night, ones I might not be into that much otherwise. Songs such as “Deep Cuts The Knife”, “When The Hammer Falls” and “Heavy Metal Love” really seemed to come alive on stage and it helps that all three have that sing along factor to them. While some tracks sounded better live, there were a handful (and most notably one) which I thought did not live up to their potential. Vollmer‘s voice has more than stood the test of time after over four decades of singing, but I did notice that there were a few song verses where he had “switched” his style to perhaps conserve his voice. The most evident were the verses for “Running Wild In The 21st Century”, which sounded pretty different and lacked the oomph that you can hear on the studio version. One song I would have loved to hear live was “The Storm”, and although The Meister and I screamed the song’s title on repeated occasions, it seemed like none of the band members heard us and the odds of Helix altering their setlist simply because two people at the front were screaming seemed unlikely. In fact, I have seen where certain other frontmen, who will remain nameless, have looked quite annoyed at hearing song requests from the audience.

After a whopping twenty song set, if you include the entertaining bass solo from Daryl Gray (who played his bass with a violin bow at one point) and the dual guitar solo from Julke and Duck, it was great to see Helix come back for an encore. First up was the very good ballad “Good To The Last Drop”, which was good news to me since I thought that they would likely end their set on a more spirited song. It was therefore no surprise that Helix closed off their quality set with the faster “Heavy Metal Cowboys”. Within literally five minutes of ending their show, most, if not all, of the band members were out talking to fans and signing things at their merchandise booth. I usually don’t say anything about a band’s merchandise, but I have to say that Helix have one of the most enticing booths around — t-shirts, mugs, guitar picks, a wide selection of CDs with some at too good to pass prices, and even Vollmer’s autobiography ‘Gimme An R!’ were all available for sale. Just like the first time that I saw Helix more than four years ago, I simply felt compelled to purchase a couple of items. I believe that a lot of credit has to go to the friendly Randy Heywood, who I understand runs the Helix merchandise booth and who advised me that he was the “Randy” in the ‘Gimme An R!’ book I purchased that night.

It may be 41 years since Vollmer first formed Helix, but it certainly appeared from the band’s performance at The Ranch that the frontman and his group have a lot of gas left in the tank!”

Helix‘s “Even Jesus (Wasn’t Love In His Hometown)” video: