Coinciding with the release of their debut album Psychotic Symphony yesterday, Sons Of Apollo released a video for their song “Lost In Oblivion.” 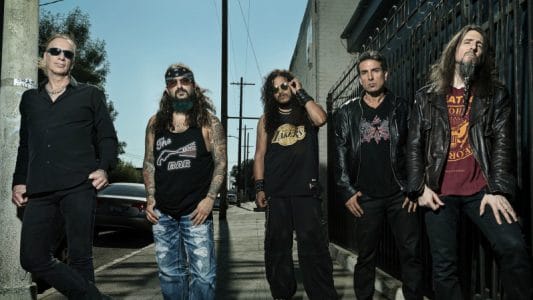 Released via InsideOutMusic/Sony, Psychotic Symphony is available as a 2CD Mediabook (featuring a second disc of instrumental mixes and extended booklet with an exclusive studio diary), Gatefold 2LP vinyl + CD (which comes with an etching on side D and the entire album on the CD), Standard Jewelcase CD & digital download. It was produced by the dynamic production duo of Portnoy and Sherinian, also affectionately known as “The Del Fuvio Brothers,” which is the nickname given to them over 20 years ago during their time together in Dream Theater…

As Portnoy exclaims [yesterday], “I can’t believe it’s finally here!!! The Sons of Apollo debut album is finally out today! This album has a little bit of something for everybody…Classic rock, metal, prog…it’s a musical feast for the ears! To prime everybody for the release, we’re excited to debut the video for ‘Lost In Oblivion.’ This song is full-on energy, excitement and shred! From that crazy double bass drum pattern that took me forever to perfect, to the insane bass and guitar unisons throughout the song, to Jeff’s always-hooky chorus…this song is another great example of what this band is about.”

In an interview with Team Rock, Portnoy stated the following about the track “Lost In Oblivion”: “Bumblefoot had a riff he called the “Rushuggah” riff – it was kind Rush meets Meshuggah. It was one of the hardest patterns I’ve ever had to cop. It took me a long time to learn it, about 30 minutes, which is pretty unheard of for me. Normally I can play something right on the spot. So it’s based around this riff – it’s a really upbeat, heavy song – it’s got kind of a Rob Zombie verse, but a hooky, Jeff Scott Soto chorus. And it’s got this guitar and bass breakdown after the drum breakdown – it’s like Eat ‘Em And Smile, but to a whole other degree of insanity.”