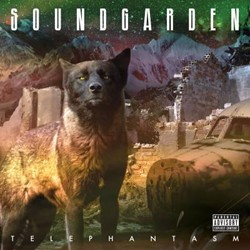 Last night at the Paramount Lot in Los Angeles, the Recording Industry Association of America (RIAA), UMe and gaming publisher Activision Publishing, Inc. awarded Soundgarden with a platinum plaque acknowledging the innovative partnership and distribution behind Soundgarden’s newest album in 13 years, Telephantasm (A&M/UMe). The multi-label, career-spanning retrospective album was released today inside 1 million copies of the new Guitar Hero: Warriors of Rock. Soundgarden’s groundbreaking partnership with Activision marks the first time a newly released music album has been simultaneously bundled with a videogame launch, and it has opened the door to a new type of RIAA certification: recognizing a band’s success based on the sale of non-returnable units from a music label to a gaming company, instead of to a traditional retailer.

“Guitar Hero is a huge platform for music, and embracing alternative outlets is essential to an artist’s success in today’s marketplace.” said Kate Harold, Director of Artist & Industry Relations and the Gold & Platinum Awards Program for the RIAA. “This unique partnership between Universal Music Group and Activision demonstrates the value music brings to other industries and is a perfect example of how modern music companies continue to find new ways to reach fans. I anticipate we’ll be seeing more and more of these types of partnerships and cross-pollination of industries which benefit everyone, especially music fans.”

“Guitar Hero: Warriors of Rock, Soundgarden and Universal Music are breaking new ground with this innovative partnership,” said David Haddad, Chief Operating Officer, Guitar Hero. “Soundgarden’s seminal music will be available through all of Guitar Hero’s distribution channels – physical retail, digital download through consoles, and the iPhone – proving that Guitar Hero is a platform to bring an interactive music experience to new audiences and fans. We’re thrilled to be collaborating with Soundgarden at such an exciting point in their career.”

Soundgarden’s first retrospective, Telephantasm includes beloved band hits, deep back catalogue cuts and a never-before-heard unreleased track entitled “Black Rain,” taken from the Badmotorfinger recording sessions. “Black Rain,” called “a grunge grenade” by USA Today, received a 4-star review from Rolling Stone and is currently #8 at Mainstream Rock. AOL Spinner recently premiered the new video for the song -http://www.spinner.com/2010/09/17/soundgarden-black-rain-video-premiere/ . Directed and created by animator Brendon Small from Adult Swim’s wildly popular and imaginative show “Metalocalypse,” the video takes fans through an epic battle in post-apocalyptic Seattle, WA between an animated- Soundgarden-manned translucent robot, and a multi-appendage giant monster. This is the first artist-driven music video based off the show.

Additionally, A&M/UMe has released 3 deluxe expanded versions of Telephantasm available today including a double-disc with 12 additional tracks, 5 of which are previously unreleased, and Soundgarden’s first-ever DVD, featuring 20 videos, 13 of which have never been released. Additionally, a Deluxe 3-LP Vinyl Edition and an individually numbered Super Deluxe Collector’s Edition box set are available today. The Super Deluxe Collector’s Edition will be available for a limited time and will include 2 CDs, the limited edition DVD, three heavy vinyl discs, each uniquely colored, a 20-page book featuring rare photos and liner notes by Kim Thayil, Jeff Gilbert and Matt Pinfield, a double-sided panorama poster of the album artwork, an art print of each band member, a litho of the Showbox show poster and more. These 3 deluxe expanded versions will be available at all music retail outlets and on the band’s website.