Italian rockers Speed Stroke consisting of lead vocalist Jack, guitarists D.B. and Michael, bassist Fungo and drummer Andrew have announced that they will be releasing their new album Scene of The Crime via Street Symphonies Records and Burning Minds Music Group sometime in the fall of 2020. 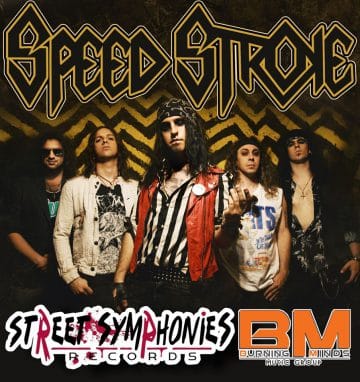 Some of you may know that we started as a band in 2010, recording a rendition Crashdïet‘s “Riot in Everyone” for a Dave Lepard Tribute album released by the guys at Street Symphonies.

We haven’t worked together ever since and now 10 years after we met again, shook off some rust and teamed up to bring this absolute banger to your beautiful ears and reach its full potential.. just like when it all began ?

We can’t wait to share what we have in store with you all ?

Sleaze Roxx stated the following in its review of Speed Stroke‘s last album Fury: “Speed Stroke are another great new band that should be so much bigger than they are. Their album Fury is full of great songs with no filler whatsoever. Initially, I wasn’t overly impressed with the lead off track “Demon Alcohol” which was featured in video format so I never bothered purchasing the album. I think that the slightly modern sounding guitar sound kind of pushed me away a little bit.

I am glad that Speed Stroke later sent a copy of their album to Sleaze Roxx because as it turns out, Fury is a solid album dripping with sleaze, attitude, a tad of raunchiness and some good melodies. Sure, the slightly modern sounding guitars at times aren’t exactly what I pine for but I get that bands don’t want to play exactly ’80s sounding guitar riffs thirty years later after that era has passed by.”