Speed Stroke to tour Sweden for first time in November 2017

Italian sleaze rockers Speed Stroke will be doing a mini-tour of Sweden for the first time in November 2017. 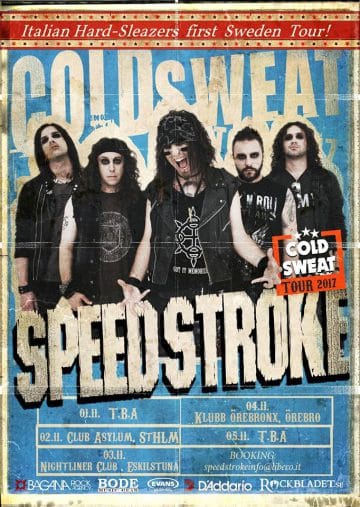 The following message was posted in part on Speed Stroke‘s Facebook page yesterday:

“?? SWEDEN ??
We’re gonna penetrate you in November!
It will be so damn hot & cold at the same time ✖️

Come out & play with us! Skål”

Sleaze Roxx stated the following in its review of Speed Stroke‘s album Fury: “Overall, Speed Stroke‘s Fury is the type of record that I can put on and enjoy pretty much right away from start to finish. Does it really matter if there is no one song that sticks out over the rest? Probably not. The more important thing is that Speed Stroke have delivered eleven solid sleaze filled songs that are definitely worth checking out.”