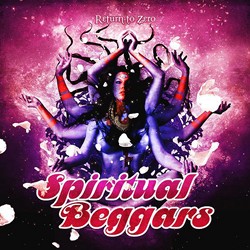 Sweden’s SPIRITUAL BEGGARS finally return to the spotlight with their first new studio album in five years, “Return To Zero”. Once again, the ‘Beggars effortlessly manage to confirm they are a band that continues to defy musical boundaries and that delivers Classic Heavy Rock at its very best!

The artwork of the upcoming album is done by the well known Brazilian artist Gustavo Sazes. SPIRITUAL BEGGARS’s guitarist Michael Amott states: “I’m extremely pleased with the “Return To Zero” cover! To me, it’s the quintessential SPIRITUAL BEGGARS artwork. The artist really managed to capture the essence of our band, the new album and the constant flow of cryptic ideas I was throwing at him!As I’m old school, I can’t wait to see this in its full glory on the vinyl LP… But hey, it’ll look cool as a minuscular image on your iPod too!”

SPIRITUAL BEGGARS “Return To Zero” Tracklisting:
1. Return To Zero [Intro]
2. Lost In Yesterday
3. Star Born
4. The Chaos Of Rebirth
5. We Are Free
6. Spirit Of The Wind
7. Coming Home
8. Concrete Horizon
9. A New Dawn Rising
10. Believe In Me
11. Dead Weight
12. The Road Less Travelled

On the SPIRITUAL BEGGARS official myspace page the band uploaded a short audio sample of the new album as a pre-listening teaser. For more information please check the bands myspace-profile as well as their Twitter-Account:
www.myspace.com/spiritualbeggars
twitter.com/Spiritual_B

“Return To Zero” will be released in Europe on August 30th via InsideOutMusic.