Spotlight on 7th edition of M-Pre Party scheduled for April 28, 2016 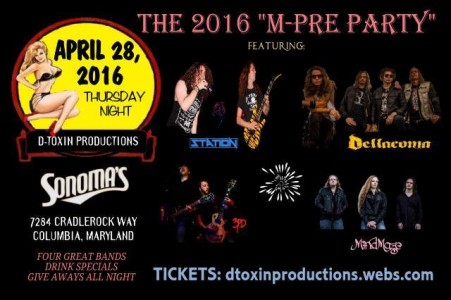 Speaking exclusively with Sleaze Roxx, M-Pre Party founder and organizer Dave Dillman explained what prompted him to organize the event: “I actually thought there was a void that could be filled by the ‘M-Pre Party.’ There are so many hard working younger bands that hold true to the ’80s hard rock/glam/sleaze sound that need to be heard. I wanted to give people who love the same type of music that I do an opportunity to see some of these young bands. I also wanted to give these bands a chance to get their music heard. It’s a win/win for both the bands and the people who attend.”

In terms of the criteria that Dillman sets out to choose each year’s M-Pre Party line-up, he stated: “I pretty much stick to the same criteria each year as far as what I look for to fill the ‘M-Pre Party’ line up. First and foremost, the bands must have original 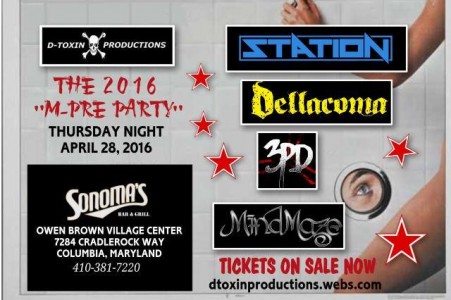 music and deliver live. I also have to like the bands myself. I would love to be able to say that money didn’t have anything to do with it… but I can’t. The line up each year does have to work financially.”

In recent years, there has been competition from other events on the same night as the M-Pre Party that really target the same audience being the people who will be attending the M3 Rock Festival the next day. When asked about whether he had considered working together with these competing events, Dillman replied: “As far as ‘competing shows’ go… I can’t really worry about that. I just book four or five really good original bands and let people decide where to go. I have never really considered working with any of the other organizers from other shows because they do not share the same vision I do. I only book up and coming bands that play their own music… That is where my heart is. Most other promoters are not interested in booking these bands. My venue is packed every year so I will continue to do things the same way as long as people keep coming out to support the original music.”

In terms of his favorite performance over the previous six editions of the M-Pre Party, Dillman stated: “Wow! How can I possibly answer this one? I feel that every year has had a very strong line up. For the 2016 M-Pre Party, the band Station is back for the fourth year in a row so obviously I really like them. In 2014, the band Black Tora came up from Texas and they were an instant hit with everyone. Wildstreet from New York City played in 2011 and 2012. They were a crowd favorite. And there is no way I can answer this without including the band Diemonds from Canada. Diemonds always puts on a great high energy show. 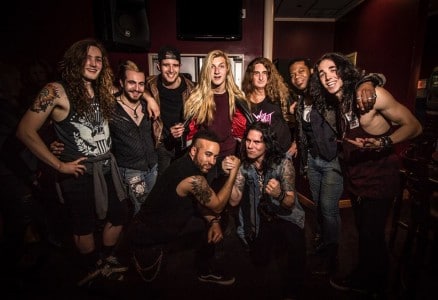 Of note, Sleaze Roxx attended the last edition of the M-Pre Party which featured Last Call Messiahs (Raleigh, North Carolina, USA), Lady Beast (Pittsburgh, Pennsylvania, USA), Nasty Habit (Syracuse, New York, USA), Mach22 (Philadelphia, Pennsylvania, USA) and Station (New York, New York, USA). Sleaze Roxx stated in its review of the 2015 M-Pre Party: “As I was leaving the Sonoma Bar & Grill venue after the five bands — all handpicked by M-Pre Party organizer Dave Dillman — had played their sets, I could not help but think how lucky I was to have seen all these bands play live under one roof given that none of these bands had yet to play in the Toronto, Canada area as far as I know. I admit not being familiar or that familiar with any of the bands aside from Nasty Habit when the line-up for the 2015 edition of the M-Pre Party was first announced. As it would turn out, the two bands that I was not familiar with at all at that time, Last Call Messiahs and Lady Beast, turned out to have delivered some of my favorite records of recent time.”

MindMaze are a traditional progressive / power metal female fronted band founded back in September 2004. The group’s Facebook bio states in part (with slight edits): “MindMaze are a promising band like no other. In a time when female-fronted metal is at an all-time high in popularity but also at an all-time high for copycats and imitators, MindMaze have striven hard to forge their own sound and identity. Hailing from Allentown, Pennsylvania the four-piece band are young (all aged 23-25), but have honed their craft with over one-hundred gigs spanning over 250+ miles, including sharing the stage with metal mainstays 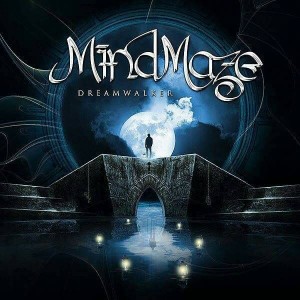 such as Saxon, Doro, Overkill, Jon Oliva’s Pain, Circle II Circle, Fozzy, George Lynch, Raven, and many more. The band’s debut album Mask Of Lies has been hailed by fans and critics all over the world as an outstanding piece of independent metal that is refreshing while being firmly rooted in many classic metal mainstays. With no label support, management, or outside hired promotion, the band managed to sell copies of Mask Of Lies to fans in 34 of 50 United States and a total of 17 countries worldwide, selling 90% of the album’s first pressing in the first 10 months of its release.”

MindMaze released their sophomore album Back From The Edge in 2014. The group’s Facebook events page further states: “MindMaze spent 2015 celebrating the release of our fan-funded limited edition Dreamwalker EP, self-funding a tour with Iris Divine, and doing a first official support tour with legends Saxon and Armored Saint. It was a year of immense growth and development in the saga of burgeoning band, seeing us also joining up with Infinity Concerts and doing support gigs with Evergrey, Enchant, and others. 2016 will be a year of preparing and constructing our third full-length album, tentatively planned for an early 2017 release. We spent much of 2015 writing this album in pieces, determined not to rush anything about the writing and arrangement process. This was by far the most collaborative writing we’ve ever done, and the variety and dynamics of the material is very reflective of that. The new album will also be our first-ever conceptual album, the details and story of which will be further revealed as time goes by.”

MindMaze – Back From The Edge [full track]

Founded in 2013, 3 Parts Dead play a fiery brand of sleaze/punk rock. The group’s Facebook bio states in part (with slight edits): “3 Parts Dead plays rock n’ roll with all the subtlety of an atomic bomb. Their brand of fast driving hard drinking rock 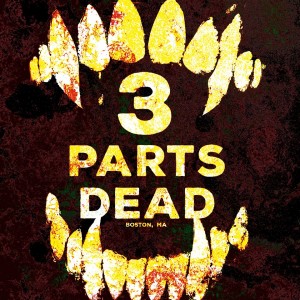 pummels the senses, taking you on a ride you won’t soon forget. And no, they’re not going to call you the next day. Born from the ashes of Pretty Little Suicide, 3PD has hit the ground running. In the 3 years as PLS, they’ve shared the stage with some of the biggest names in rock (Motley Crue, Hinder, Slash, to name a few), played world famous festivals like Rocklahoma and Rock N America, received worldwide fm and internet radio play, and been featured in international publications like Classic Rock Magazine. Despite this success, the band was plagued since day one with lineup changes. As the lineup evolved, so did the music, and in 2013 with new faces and a new heavier sound, they settled on a new name. And as 3 Parts Dead, they sound better than ever.”

Back in July 2014, Sleaze Roxx reviewed 3 Parts Dead‘s debut self-titled EP and stated: “There are so many great new bands these days that it is quite difficult to keep up with them all. One of those fresh new groups — originating from Boston and the ashes of Pretty Little Suicide — that has made their way onto the Sleaze Roxx radar is 3 Parts Dead. The band sounds part sleaze, part rock, and part punk with plenty of attitude. The one distinguishing feature that sets 3 Parts Dead apart is the lead vocals from frontman Mike Patton. Nobody in particular comes to mind when listening to him sing — aside from perhaps L.A. Guns’ Phil Lewis in some ways — but he does have an original sounding voice.” Sleaze Roxx concluded in its review: “Overall, 3 Parts Dead deliver a strong debut EP and I am looking forward to hearing what they come up with next.” 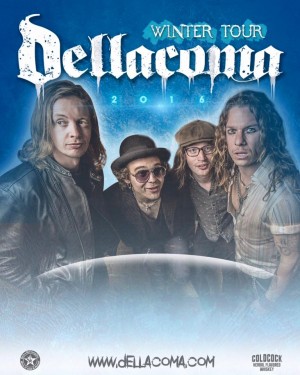 Excluding Canadian sleaze rockers Diemonds, Australia’s Dellacoma will be the first international act that will be playing the M-Pre Party. Dellacoma are a hard rocking, explosive and ’70s influenced hard rock band that has already toured extensively in the Unites States of America on a number of occasions.

The group is comprised of Rick Reynolds (bass), Art Struck (guitar), Matt Cook (drums) and Dellacoma Rio (vocals). Dellacoma released their debut full-length and aptly named album South Of Everything on April 10, 2015. The band’s Facebook bio is short and sweet, and states in part: “We play rock n roll…”

In regard to this year’s line-up, Dillman advised: “I am really looking forward to Dellacoma at this year’s show on April 28, 2016. Dellacoma is one band that you do not want to miss if you have an opportunity to see them. As I mentioned earlier, Station will be back in 2016. Also playing this year are Three Parts Dead (3PD) and MindMaze both of who I am really looking forward to.”

Station need no introduction to past M-Pre Party attendees as they will be playing for a record fourth time (and fourth year in a row) at the M-Pre Party on April 28, 2016. Station‘s Facebook bio states in part (with slight edits): “Station is one of the hottest new bands to come out of New York City. A high voltage stage show with electrifying melodies make Station an unforgettable experience. They have shared the stage with rock greats such as Pat Benatar, Vince Neil (Mötley Crüe), Bret Michaels (Poison), Eric Martin (Mr. Big), Dio Disciples, Jake E Lee and .38 Special to name a few. Their first EP, “Wired”, has gained international attention and rave reviews from notable publications such as Classic Rock AOR (also included on covermount CD), Sleaze Roxx and Rock Report.” 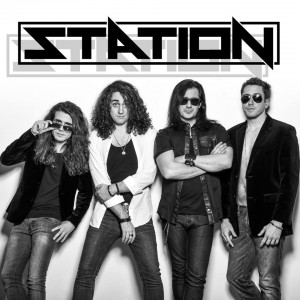 Sleaze Roxx stated the following in its review of Station‘s debut EP Wired released in March 2013: “The only drawback to this EP, aptly titled Wired, is that it is only an EP — what a damn tease. Open case, insert disc, and enjoy four of the most polished, well written, perfectly structured and just plain old enjoyable kick ass rock ‘n’ roll ditties you could ever hope to hear come rollicking out of your stereo — ensconcing your soul, having you sing along in seconds and air guitaring like it was 1980-something. But alas, then all too soon the disc is over. I know it’s sad, but certainly leaves you aurally pleased, satisfied, and yet wanting more — so much more. Why you say, because it’s that good — Wired is like ear heroin, like soup, like nothings bad — let me tell you that much.”

With respect to Station‘s debut full-length self-titled album released in April 2015, Sleaze Roxx stated in its review: “If every song on Station‘s full length self-titled record was as good as the first three songs, the album would be an easy contender for record of the year… There is no question that the first three songs, “I Don’t Want To Know Your Name”, “Everything” and “Dressed To Kill” (the latter of which was the advance single released from the new record), on Station are awesome, catchy and could well help you reach melodic rock ecstacy. With the song “Everything”, Station show that Steel Panther is not the only band that can come up with great hooks and melodies.”