While some artists and bands such as Great White, Dokken and the Ron Keel Band have started playing shows again in the United States of America since the Covid-19 pandemic shut down virtually the entire world in mid-March 2020, some artists have not been able or have opted not to resume playing shows as of yet. 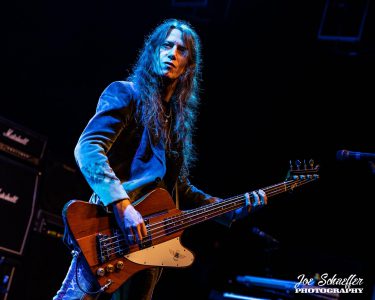 Spread Eagle, Sebastian Bach and UFO bassist Rob De Luca had a lot of touring plans for 2020 that have grinded to a halt.

Spread Eagle consisting of De Luca on bass, Ray Wes on lead vocals, Ziv Shalev on guitar and Rik De Luca in drums had just released their much anticipated studio album Subway To The Stars via Frontiers Music Srl back in August 2019. With their last show dating back to the Hard Rock Hell Sleaze Festival at the O2 Academy in Sheffield, England on September 3, 2017, Spread Eagle announced in December 2019 that they had ten shows booked throughout North America from March 20, 2020 to June 7, 2020.

Between Spread Eagle gigs, De Luca was going to be very busy with 33 scheduled shows as Bach‘s bassist throughout North America on the latter’s second leg of his Anniversary Tour celebrating Skid Row‘s debut album. Due to Covid-19, that tour has been rescheduled to the fall of 2020.

De Luca was recently interviewed by All Music/All Bands and he spoke about the impact that the Covid-19 pandemic has had on himself, his family and the bands that he plays for. The bassist didn’t mince words as he indicated (with slight edits): “Devastating. My ENTIRE career has stopped, except for songwriting.” De Luca also stated: “We had an awesome US/Canada tour booked but Covid had other plans for us.” He added: “I haven’t worked a single day since the Rock Legends Cruise on March 2nd. I’m on unemployment.”

The good news is that De Luca and his Spread Eagle bandmates have already started working on the follow up to Subway To The Stars. In terms of the new material, De Luca indicated: It’s good! Aggressive, heavy grooving, lots of interesting parts and personality! Our fans will love it.” He added: “Everyone in the band writes. We work remotely, then get together to arrange.”

You can read the rest of the interview with Rob De Luca at All Music/All Bands‘ Facebook page.