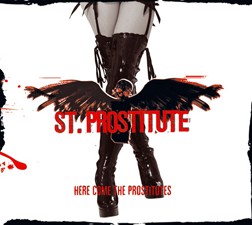 St. Prostitute is a new rock band playing authentic and uncompromising rock with a strong focus on modern cool grooves and catchy melodies. The band got in touch with producer Soren Andersen at Medley Studios and the cooperation between the two soon proved to be a match made in rock ‘n’ roll heaven. Andersen saw the band’s potential and star quality and says of St. Prostitute’s upcoming debut album, “St. Prostitute stand out from the crowd of many rock bands that are currently on the road, simply because they are able to write a good hook.”

The band had the honor of opening the Friday Rock in Tivoli, Copenhagen where they played with legendary Danish rock band Pretty Maids on the lawn in front of more than 12,000 enthusiastic spectators. Additionally, the four rock musicians played some of the best and most respected venues and in early 2010 St. Prostitute played a small club tour in the U.S. Here the band took a trip to such legendary Hollywood venues as the Whiskey A Go Go and the Viper Room and became the first Danish band to perform at Wasted Space (Hard Rock Hotel) in Las Vegas.

The band has an eye for, and a fascination for, hard rock and punk rock music from the 80s and 90s. With Rock ‘N’ Roll running in their veins, the band — comprising of , Kim “Finn” Mikkelmann (bass) and Jack Andy (drums) — is determined to conquer the world with their unique and authentic music. St. Prostitute loves to play live and prefers to play as loud as possible. Each time the band hits the stage they deliver a high-energy show in such a charming and convincing way that audiences just loves ’em!