Former L.A. Guns guitarist Stacey Blades was recently interviewed by Mitch Lafon on the Rock Talk With Mitch Lafon podcast and spoke about his time in drummer Bobby Blotzer‘s Ratt. 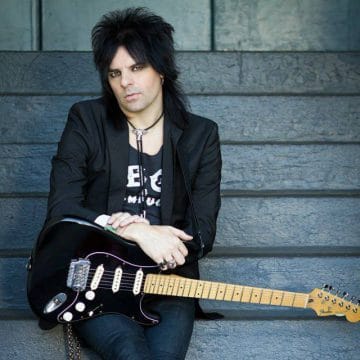 Blades stated the following about his experience in Blotzer‘s Ratt (as transcribed by Blabbermouth): “It was very surreal… Because [Bobby] had called me in… I think it was beginning of August [of 2016], and he was telling me what was going on. I had been very good friends with him for years — very good friends with Bobby — and he had reached out to me and told me what was going on. I said, ‘Let me think about it.’ And then, the following week, he texted me on a Monday. He was, like, ‘Can you be on a plane on Wednesday, learn the whole set and play…’ — I think it was a Wednesday or a Thursday, or something like that — and I was, like, ‘Oh my God! Yeah, okay. I’ve gotta get to work. I’ll see you in a couple of days.’ And no rehearsal, two days to learn the entire set, and the first gig, like I said, was in front of 35,000 people. It was surreal, it was a trip. But we had great shows playing with all my friends in Warrant, Firehouse and Bret Michaels. It was a wonderful experience, so all good with that.”

Back in July 2017, Sleaze Roxx interviewed singer Seann Nicols who replaced Josh Alan as the lead vocalist in Blotzer‘s Ratt. Nicols stated as follows about the status of Blotzer‘s Ratt: “The status is the same as it was. Bobby and I are still in communication. I know that he recently underwent back surgery so he’s in recovery and he is just working on feeling better. He’s obviously got a lot of legal issues that he’s trying to sort out with the trademark and fighting with the other guys from Ratt. But from what I’ve seen, it seems that Bobby does have legal ownership over the trademark and it’s just going to take some time for him to get it all sorted out in court. So that puts his business with Ratt on hold while he gets that sorted out.”

When asked whether the plan was to continue with Blotzer‘s Ratt, Nicols replied: “Yeah. Absolutely. I know that for me, it’s a lot of downtime to wait for all that so I’ve gotten involved with Westfield Massacre, which I am very excited about playing with these guys. I know that other guys like Brad Lang — he’s doing other performances. Stacey Blades — he’s doing stuff and looking for other opportunities. Mitch Perry, I’m sure, is working on several projects ’cause he’s always involved in something really cool. So yeah, everybody is doing their own thing but when Bobby is ready, if and when the time is right, then we will all come back together and we will do it again.”