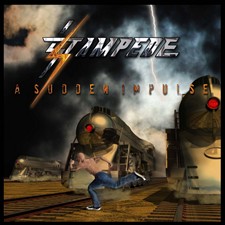 Stampede have recently been in the studio recording a special remake of “Shadows Of The Night”, a track which was an old favourite and always a mainstay of their live set. The track is nowavailable to download for free exclusively from the band’s official Facebook page at www.facebook.com/stampederock, and will be available for a limited time only.

The band announce news of the free download just as they kick off a series of live dates with US rockers Y&T, in support of their new album ‘A Sudden Impulse’, released in May this year onRock Candy Records.

Although originally recorded live, both for a BBC In Concert session and at Reading Rock Festival in 1982 for the live Official Bootleg album, up until now Stampede had never recorded a studioversion of the song.

“We wanted to do something to say a big thank you to our fans and to all the people that have supported us this year with the release of our new album ‘A Sudden Impulse'”, states vocalistReuben Archer. “Shadows of the Night has always been a real favourite of ours so we thought it would be great to do a studio version to give to our fans”