California, USA rockers Stang featuring Drew Southern on guitar and lead vocals, Brandon Allen on drums and Chris Heim on bass have unveiled live videos for their songs “Burnin’ Through My Soul”, “Roll Down” and “Burn It Down.” Stang released their self-titled album back in March 2016, which is available for purchase via a variety of mediums including the group’s Bandcamp page. 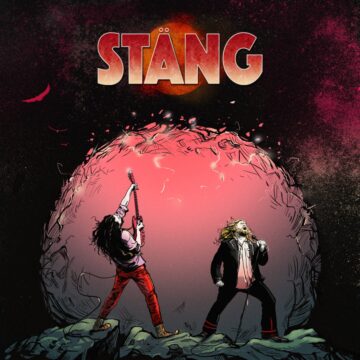 Stang‘s “Biography” on their website states in part (with slight dits):

“Stang is a band that’s all about the live show. We’re on a mission to be the most exciting live rock n roll act possible. If it doesn’t hit live, we don’t want to play it. If it doesn’t feel good in the rehearsal room, we won’t record it. For us, It’s all about how the songs hit live.

Stang is a straightforward rock n roll band. Tough, chugging drum and bass patterns that make you want to dance with aggressive guitars over top. 100 proof guitar-driven rock n roll. We don’t use backing tracks, we don’t mind extending solos and jamming live. We want to throw down and rock your face off, simple as that. The sound is tight, the feel is loose. We’re here to bring you good energy and have a great time playing entertaining rock music for you.

In Stang, we have a very talented group of musicians. Three of the members went to Berkeley School of Music (and the other two are meat-head rockers). The band consists of frontman Drew Southern on guitar and lead vocals, Brandon Allen on drums and Chris Heim on bass.

One of the highlights so far was getting an encore from the crowd at the Whiskey A Go-Go opening for the Hollywood Roses July 24th, 2021. The crowd didn’t know who we were, didn’t know our songs, but by the end of our set they were screaming “encore.” Even the sound guy was impressed. After the set, I remember the sound guy saying over the PA, “What the hell was that!? Damn! Good luck Roses following that!” He said that in the cub, everyone heard it. That put a huge smile on my face. My purpose with this band is to bring the most exciting, raw rock n roll to the audience. – Drew Southern

Stang‘s “Burn It Down” live video: