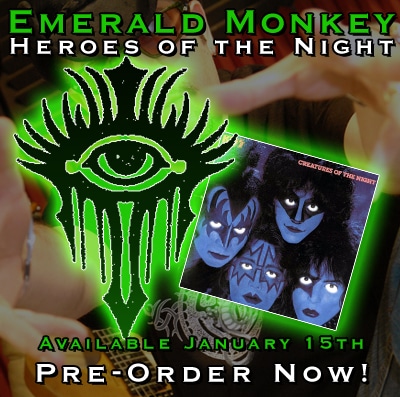 STARS GUEST ON KISS’ CREATURES OF THE NIGHT TRIBUTE CD:

Heroes of the Night also includes a variety of extra material. In addition to the complete Creatures of the Night tracks listing, you will also find a stellar version of Shout It Out Loud, performed by former Bonham vocalist Daniel Macmaster, a bonus three song EP from Emerald Monkey, as well as Enhanced CD features including music videos, exclusive images, digital liner notes, and more.

About Creatures of the Night:
Creatures of the Night is a 1982 album from U.S. hard rock band Kiss. It is the band’s 14th studio album and the last for Casablanca Records, the only label the group had ever recorded for up to that point. The album was also dedicated to the memory of Casablanca founder and early Kiss supporter Neil Bogart, who had died of cancer during the recording sessions.

The album represented a conscious effort on Kiss’s part to return to the style of hard rock that had helped them achieve commercial success in the 1970s. That success had been in decline since 1979’s album Dynasty and 1980s Unmasked, both decidedly pop-oriented efforts. Both albums, although relative commercial successes, had completely alienated Kiss’s original rock-based “Kiss Army” fan base, and Music from “The Elder”, a concept album in 1981, sealed the deal. By 1981, most original Kiss fans had abandoned the group in disgust.[citation needed] Kiss knew it needed to deliver on their earlier promise of a heavy record if they were to continue as a band. The first key ingredient was songwriter/guitarist Vincent Cusano, with whom the band had recently begun writing and recording, and was soon to replace Frehley as the band’s new lead guitarist.