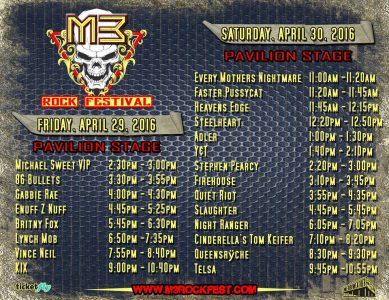 The 2016 edition of the M3 Rock Festival will be starting in four days with one rotating stage compared to years past when there were two stages with one at either side of the venue.

Sleaze Roxx attended the 2015 edition of the M3 Rock Festival and expressed concerns with the side stage when it stated in its concert review for day two (part one of three): “…my friend The Meister and I made our way to the side stage at 10:45 am, which was a whopping 45 minutes before the first band (Killer Dwarfs) was scheduled to start there. The sun was shining with a few clouds in the sky. I was quite shocked to see that the side stage’s dimensions and layout had changed dramatically from the previous year. The biggest difference was that the side stage was now much lower to the ground and so much so that the bands performing would likely only be one “head” above the first row of the crowd in front of them. This was a sharp contrast to last year’s side stage that was high up in the air and which gave all in the audience a great view of that stage. 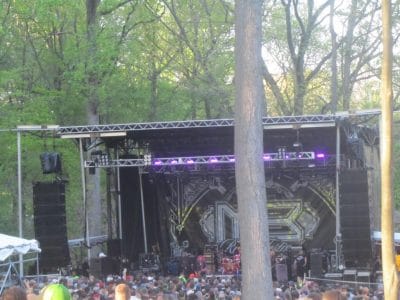 While The Meister and I’s view of the side stage for the Killer Dwarfs‘ set was going to be very good since we were part of the second row of people behind the stage barrier, it quickly dawned on me that the sight lines of the side stage for most of the crowd would be poor to abysmal (due to being limited to seeing the performers’ heads and not much more). This prompted my first “hard” decision of foregoing the sets from both Rhino Bucket and Vixen on the main pavilion stage in order to keep my spot near the stage barrier for the upcoming sets from Tyketto and Black ‘N’ Blue on the side stage.”

The side stage’s sightline problems continued throughout day two of M3 Rock Festival’s 2015 edition as Sleaze Roxx indicated in its concert review of day two (part three of three): “As had been the case with the side stage for the entire Day Two of the 2015 edition of the M3 Rock Festival, if you were not in the front rows for that stage, your sight line of that stage was going to be severely impeded and that adversely affected my enjoyment of Y&T‘s performance to a certain extent.”

The one rotating stage for M3 Rock Festival’s 2016 edition appears to be a great solution to the problems emanating from the side stage’s sightlines at last year’s M3 Rock Festival.