Steel Panther continue to be one of the hardest working bands in the last decade. The group has announced some new North American tour dates for March 2019 and have begun work on their fifth studio album. Steel Panther‘s fourth studio album Lower The Bar finished at #6 on the Sleaze Roxx’s Top Ten Albums of 2017 and #11 on the Sleaze Roxx Readers’ Top 20 Albums of 2017. 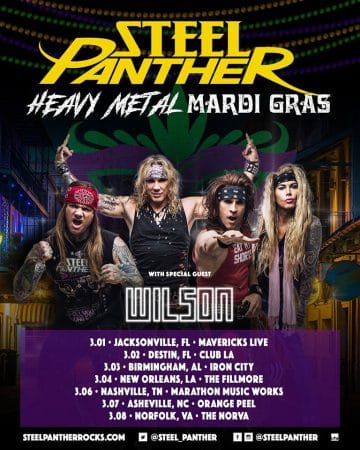 Sleaze Roxx caught Steel Panther in concert at Maxwell’s Concerts & Events in Waterloo, Ontario, Canada back in September 2018 and stated in its concert review: “As previously mentioned, a Steel Panther concert is simply a lot of fun and I am always amazed at all the smiles in the audience during the entire show. In terms of Steel Panther‘s comedy routine, there seemed to be a bigger emphasis this time around on Satchel and Michael Starr promoting drug use (joking of course). There seems to be a fair amount of ad libbing on stage and Satchel usually tends to keep things current so it was funny to hear him announce that Tiger Woods was back on top before the group launched into their third song of the night — “Just Like Tiger Woods.” Of course, Satchel was referring to Woods finally winning a PGA golf event again after a five year drought. What was most impressive about the cover songs played by Steel Panther was how Starr handled them vocally. He sang in a lower register for the Scorpions classic “Rock You Like A Hurricane” so that his voice was close toe Klaus Meine on that one. He absolutely nailed Van Halen‘s “Panama” but I totally expected that given that he used to play in the Van Halen tribute band The Atomic Punks.”