Steel Panther consisting of frontman Michael Starr, guitarist Satchel, bassist Lexxi Foxx and drummer Stix Zadinia are back in the touring swing of things as they have announced new US dates in September for their continuing Heavy Metal Rules Tour. 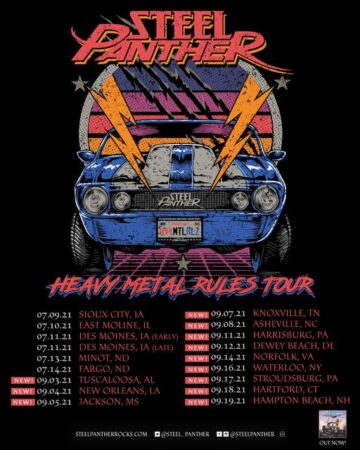 Sleaze Roxx stated the following in its review of Steel Panther‘s tour stop at the music venue Rebel in Toronto, Ontario, Canada back in early December 2019: “I laughed — a lot. I smiled throughout. I sung along to most of the lyrics. I raised my fists in the air too many times to remember. I clapped my hands. I waved my hands along with the rest of the crowd. I got one of Lexxi Foxx‘s bass picks. I simply had a fantastic time at my 12th Steel Panther concert. I love that Steel Panther consistency and continually tour, and every year, it seems that I am able to catch them two times live within a one-hour radius of Toronto. This year was no exception as Steel Panther hit the city of Barrie (about one hour north of Toronto) back in mid-June and returned to play Rebel (previously known as Sound Academy), which is apparently their favourite Toronto venue.”