Steel Panther continue their regular touring ways in Canada as the group will be bringing its Sunset Strip Live tour to nine new Canadian locations this upcoming June. 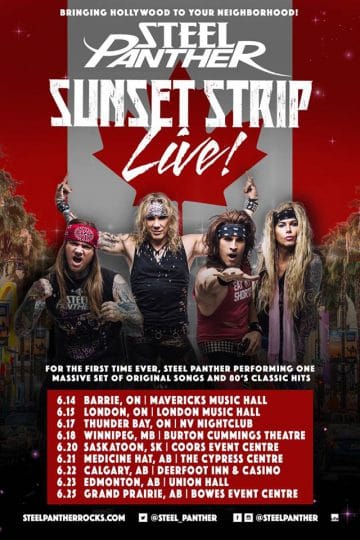 PureGrainAudio provides the following ticket information: “PureGrainAudio is also proud to bring you a special, exclusive pre-sale that will grant you the opportunity to buy tickets before the general public on-sale date. Our exclusive presale begins tomorrow, Wednesday, February 20th, at 10 am EST, at which point you will be able to purchase tickets before everyone else! Make sure to enter the promo password PUREPANTHER to be granted entrance to the exclusive presale. The pre-sale will run until Thursday at 10 pm EST, so don’t procrastinate (remember, those who procrastinate, masturbate!). The general public on-sale for Steel Panther’s summer Canadian tour will begin on Friday, February 22nd at 10 am EST at at the band’s official website.”

Sleaze Roxx stated the following in its review of Steel Panther‘s Sunset Strip Live tour stop at Maxwell’s Concerts & Events in Waterloo, Ontario, Canada back in late September 2018: “Quite frankly, Steel Panther are the most consistently great live band that I have ever seen. This was the tenth time that I was seeing the band in concert and once again, I was struck by all the smiles and laughter stemming from the crowd on hand to see guitarist Satchel, singer Michael Starr, drummer Stix Zadinia and bassist Lexxi Foxx do their thing. For those who “get it” and just want to have a very fun night, Steel Panther deliver time and time again.”

Sleaze Roxx continued: “I was curious to see Steel Panther this time around because they were bringing their legendary Sunset Strip Tour to the masses and outside the Los Angeles, California and Las Vegas, Nevada areas. For those who don’t know, Steel Panther paid their dues for many years playing covers of ’80s heavy metal hits as Metal Shop and later as Metal Skool before changing their name to Steel Panther. Accordingly, I thought that it would be fun to see them perform a few ’80s heavy metal staples this time around. Although I was looking forward to the cover songs that they would eventually play, I like Steel Panther‘s original material so much that I was hoping not to hear too many covers. As it turns out, Steel Panther struck the right balance by playing a bunch of originals at the beginning before launching in a number of cover songs and ending with a bunch of their original songs.”

Steel Panther‘s “I Got What You Want” video:

Steel Panther – I Got What You Want

Steel Panther – I Got What You WantThe official video filmed during the sold out 2016 UK Arena tourNew Album, “Lower the Bar”, available March 24th! Pre-orde…